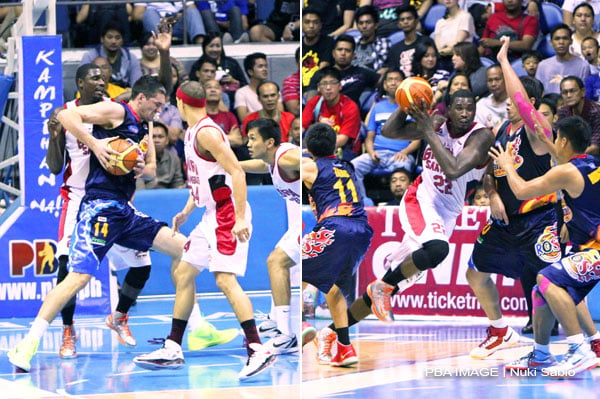 BARANGAY Ginebra San Miguel has shown its mettle anew by prevailing in a do-or-die battle and living to fight another day.

It’s now Rain or Shine’s turn to show its own stuff when the Elasto Painters and Kings square off anew Monday in the deciding game of their PBA Commissioner’s Cup duel at the Smart Araneta Coliseum.

Victor of the lone match faces Talk N Text, which beat Petron Blaze in their own quarterfinal duel.

Ginebra made it all possible by notching a come-from-behind 90-83 victory last Saturday, in the process overcoming some built-in handicaps. Reigning MVP Mark Caguioa suited up but did not play while Billy Mamaril saw limited action due to a fractured left finger.

Moments after the game, Rain or Shine coach Yeng Guiao did not put too much stock on the loss, however, and even maintained it should leave no mental scar on his charges.

“The reason why you strive to get a twice-to-beat advantage is so you can give yourself the luxury of making your mistakes,” said Guiao, whose charges were harassed into committing 23 turnovers, including seven in the decisive fourth quarter.

“The good thing about our series, we have a chance to make corrections on our mistakes tomorrow (in practice), so I think we will (still) make the semifinals,” he added.

“We have enough experience with the guys who think together long enough to know what to do in a situation like Monday.”

Guiao also dismissed the notion it was overconfidence that did his team in after it built up as many as three 15-point leads in the third quarter.

“Hindi naman overcomplacent, I don’t think so,” he stated. “We just played bad defense in the

second half and we turned the ball over 16 times in the second half so it’s really what killed us, not complacency.

“I don’t think it (complacency) was a factor in the game. We just lost our poise when we started turning the ball over.”

Momentum, though, seems to be on the side of Ginebra, especially former MVP Jayjay Helterbrand.

The 36-year-old scored all 13 of his points, anchored on 3-for-3 three-point shooting, in the fourth period in a dazzling display of his old form.

“I always want the chance to get out there because I know I’m going to be able to contribute,” said Helterbrand.

“Basta ang attitude ko, if called, I’ll try and do the best I can. That’s why I’m really thankful to coach. He always tells me to go out there and be aggressive.”

That should go for the rest of the Kings. (NC)