SOLID AS A ROCK 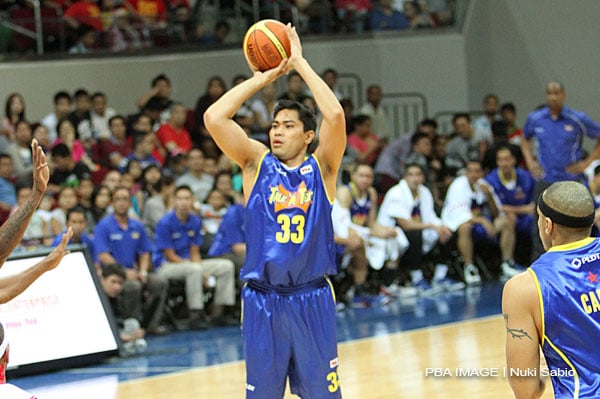 WHEN Talk N Text coach Norman Black was talking about his team being made up of experienced players, they’re the ones who know when to turn their game up a notch in the PBA Commissioner’s Cup.

He might as well have been specifically talking about Ranidel de Ocampo.

The 31-year-old led the Tropang Texters’ locals who willingly stepped up the most, enabling them to take the short route to the semifinals and earn for himself the Accel-PBA Press Corps Player of the Week honors for the period April 15 to 21.

The Philippine Cup Finals MVP spearheaded TNT’s charge over Petron Blaze in their quarterfinals duel with averages of 19.5 points and 5.5 rebounds, while helping out in defending Petron’s imposing frontline headlined by Henry Sims and June Mar Fajardo.

In TNT’s back-to-back 100-93 and 96-86 victories in the best-of-three series, De Ocampo  averaged 19.5 points and 5.5 rebounds, more than making up for the absence of Kelly Williams and import Jerome Jordan’s lackluster performance thus far.

Williams has been indefinitely sidelined by his old blood disorder while Jordan averaged only 11 points and 5.0 rebounds in those two games.

“No question, Ranidel was solid as a rock for us in the series versus Petron,” said Black of his 6-foot-5 forward-center, who shot 15-for-23 from the field, including 4-for-9 from beyond the arc.

“His performance inside the lane and beyond the three-point line was the key,” noted Black.

Indeed, De Ocampo’s recent efforts saw his stats line rise from a three-point shooting of 37 percent and an average of 10.9 points in the 14-game eliminations.

“At this point of the conference he seems fresh and energetic and he recognizes that he really needs to be consistent in the absence of Kelly Williams,” said Black.

The Texters now await the winner of the Barangay Ginebra-Rain or Shine as opponent in the best-of-five semis, where De Ocampo is again expected to play a vital role.

For sure, he will not disappoint. (NC)