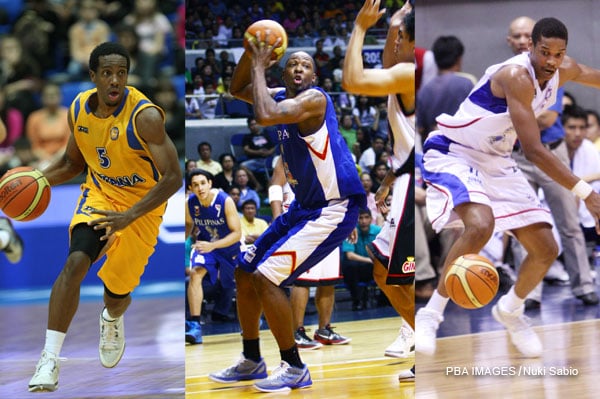 When the 27th FIBA Asia Championship tips off on August 1, one of the players on every team who will be keenly scrutinized are the naturalized players. International rules allow the naturalization of players and countries have used that to bolster or plug holes in their team’s line-ups.

The fortunes of these national teams will also largely depend on their naturalized players’ performances.

The Philippines will take their first crack at a country with a naturalized player in Jordan’s Jimmy Baxter in their second outing on August 2.

Baxter is a 6-6 shooting guard/small forward American from St. Petersburg, Florida who played for South Florida. Undrafted in the NBA, Baxter played overseas from the time he graduated, logging in frequent flyer miles from Europe to the Middle East to South America.

He will have to fill some very big shoes after Rasheim Wright was not invited back. It remains to be seen if Baxter still has his hops at 32 years of age. But he will be adding some perimeter scoring for Jordan and coach Vangelis Aleksandris who Baxter used to torch while playing for Illisiakos in Greece against the latter’s Marousi squad.

The Philippines will also be up against 6-9 Quincy Davis, a forward/center from Tulane who was naturalized just a month ago by Chinese Taipei. Davis is a complete player who can score and rebound. He also has a nose for offensive boards.

After a World Basketball League stint, Davis has mostly played abroad and in Taipei for the last two years.

Marcus Douthit will be on his second FIBA tour of duty for the Philippines. The 33-year-old 6-10 center out of Providence was selected 56th overall by the Los Angeles Lakers in the 2004 NBA Draft. With players like Chris Mihm, Brian Grant, and Vlade Divac in the lineup, Douthit saw the writing on the wall and he elected to play overseas. He has also played for the Air21 Express in the PBA.

With Douthit in the middle, Gilas has a sterling defensive presence who can also open the perimeter for the outside shooters. If he can stay in the game until the final seconds tick away, Douthit will give the Philippines a fighting chance to realize its World Championship berth dreams.

Japan, a long-time nemesis of the Philippines, will parade JR Sakuragi, the man formerly known as Milton “JR” Henderson who has made Japan his home since 2007. The 36-year-old Sakuragi, who took his surname from the popular Japanese manga character in Slam Dunk, is a UCLA alum and was drafted 56th overall in the second round of the 1998 NBA Draft where he was selected by the Vancouver (now Memphis) Grizzlies.

Of all the naturalized players who will be seeing action in FIBA, it is Qatar’s Jarvis Hayes who will go in with the most impressive resume having been drafted 10th overall in the NBA by the Washington Wizards in 2003, the same class that produced LeBron James, Dwyane Wade, and Carmelo Anthony among others.

The 31-year-old 6-8 Hayes averaged 8.3 points, 3.1 rebounds, and 1.1 assists in a seven-year NBA career that also saw him suit up for the Detroit Pistons and the New Jersey Nets.

Qatar is hoping that he can provide some outside shooting for their team that will also be depending on skipper Yasin Ismail to lead the team.

Lebanon’s Loren Woods will be familiar to Filipino basketball fans as he has played for Al Riyadi in Beirut since 2010. He has gone up against both versions of Gilas and was a part of that FIBA Asia Champions Cup side that won the 2011 title in Manila over Mahram of Iran.

The 35-year-old 7-2 center who was granted Lebanese citizenship only recently, was born in St. Louis, Missouri. Woods played for Wake Forest alongside Tim Duncan before transferring to Arizona. He was selected by the Minnesota Timberwolves in the second round of the 2001 NBA Draft; 45th overall. He spent two years with the Timberwolves before the Miami Heat picked him up. He also suited up for the Toronto Raptors before he chose the life of an international basketball player.

With Woods at the slot, Al Riyadi won the 2011 Lebanese League, the FIBA Asia Champions Cup in Manila where they defeated Mahram, and the West Asian Basketball League for an unprecedented treble. With veterans Jean Abdelnour and the ageless Fadi El Khatib, Lebanon, should be a top contender for the title if FIBA lifts the country’s suspension in time.

Korea, already a tough team with its physical players and plethora of snipers from long range, penciled in its roster a 6-6 naturalized American Gregory Stevenson.

Stevenson, a Richmond, Virginia alum, is actually half Korean as he was born to a Korean-American mother. Naturalized in 2011, the 34-year-old forward changed his name to “Moon Tae-Young”.

Moon will add some athleticism and size to Korea’s wing defense.

Kazakhstan will trot out 6-6 Jerry Johnson to be their backcourt general. Johnson played for Rider University in New Jersey. He has played international ball for the past seven years, most recently with B.C. Astana Tigers in the Kazakh National League where they won the championship.

At 31 years of age, the cat quick Johnson believes that he can play a few more years before he calls it a career.

Of all the naturalized players who will be seeing action in the FIBA tourney, Chester Jarrel “CJ” Giles will be the most recognizable among Filipino basketball fans.

The 6-11 Giles, now at 27 years of age, was the first candidate targeted by the Samahang Basketbol ng Pilipinas for naturalization. Giles suited up for Gilas in the 2009 Fiba Asia Champions Cup in Jakarta where he played heroically on an injured ankle. But his relationship with the coaching staff and team management soured over his alleged poor work habits. He was soon shown the door, a disturbing trend as he also left Kansas and Lebanon’s Al Riyadi for similar reasons.

Four years after he first came into the country’s or even international basketball’s collective consciousness, the former Los Angeles Laker and Golden State Warriors summer league player, is back, this time with Bahrain that is ranked 75th in the world by FIBA.

Read Next
THE AERIAL VOYAGER IS BACK IN THE PBA
EDITORS' PICK
Pacquiao says he is knowledgable to run for president
Rise to perfection: Spot on tiles for your stair risers
Upgrade the way you clean with ROIDMI’s vacuum cleaners
2021 PH GDP grew by 5.6 percent, slightly above target
Telcos, IT industry offer highest entry-level pay – JobStreet
Step up your vlog game with vivo’s newest smartphone
MOST READ
‘I can’t take that sitting down!’ Sotto defends Lacson after Robredo comment
Paolo Bediones to face court battle versus disgruntled staff and crew
Telcos, IT industry offer highest entry-level pay – JobStreet
Robredo slams Bongbong, rivals in Boy Abunda’s interview
Don't miss out on the latest news and information.