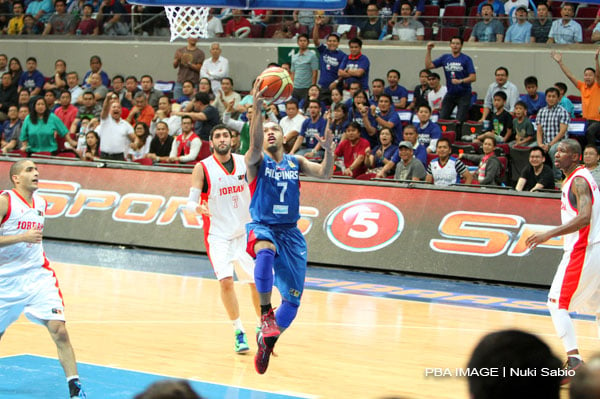 And Gilas Pilipinas has gotten over its Jordan nightmare.

With the cheering crowd behind them, the Nationals worked on a rousing third-quarter attack and went on to get back at the Jordanians, 77-71, in the 27th FIBA Asia Championship at the Mall of Asia Arena in Pasay City Friday night.

Gilas Pilipinas overcame a sluggish start and hurdled the very team that crushed its gold-medal game in the Wuhan meet in 2011.

With two straight wins over Saudi Arabia and Jordan, the host team can now look forward to the second round while Jordan faces a do-or-die game with Saudi Arabia at the close of the first round of play Saturday.

Gilas Pilipinas and Chinese Taipei fight for a perfect record that they bring into the next round as they slug it out in the 8:30 p.m. Saturday mainer.

Iran and Chinese Taipei also clinched berths to the next round while China and Japan broke into the win-column in Friday’s other games.

Of course, it was the Gilas victory that sent the crowd rocking and rolling at the MOA Arena.

Jeff Chan displayed his deft touch while Jayson Castro put on display his great quickness and court savvy as Gilas went roaring in the final half and scored revenge versus Jordan.

But not after a long anxious moment in the first half.

“You can’t print what I told them (the Nationals) at halftime,” said Gilas coach Chot Reyes himself alarmed and disappointed by their showing in the first 20 minutes of play.

But the Nationals got their game going in the final half, coming through with a key 17-to-nothing roll in the third quarter that turned the game around.

Chan topscored with 17 points, Castro contributed 16 and Marcus Douthit and Ranidel de Ocampo added 11 apiece for the Nationals who stormed ahead, 53-42, in the third period and held on for the morale-boosting victory.

“We played better tonight but I’m not yet happy. We can be happy on Aug. 11 if we achieve our goal,” said Reyes.

The Taiwanese joined the Filipinos in early second-round passage from Group A as they followed up their 91-87 decision over the Jordanians with a 90-67 thrashing of the Saudi squad.

Helping restore order in the tourney following Korea’s upset of China Thursday were victories by the Chinese and the Japanese over the Malaysians and the Hong Kong side.

China was merciless in its 113-22 demolition of Malaysia the day after being ambushed by Korea, 59-63.

Hong Kong provided some excitement in dragging Japan to a fight in the first three quarters before fading away and subsequently suffering a 59-76 loss.

The Japanese ended up with an even 1-1 win-loss card in Group B after dropping their first game to Qatar, 74-75, on an endgame meltdown Thursday.

Qatar and Hong Kong close out Group B competition as they play at 3:30 p.m. Saturday.

All three Group B teams are assured of second-round passage as a result of Lebanon’s exit. Still, they jockey for position as they carry their first-round records into the next stage.