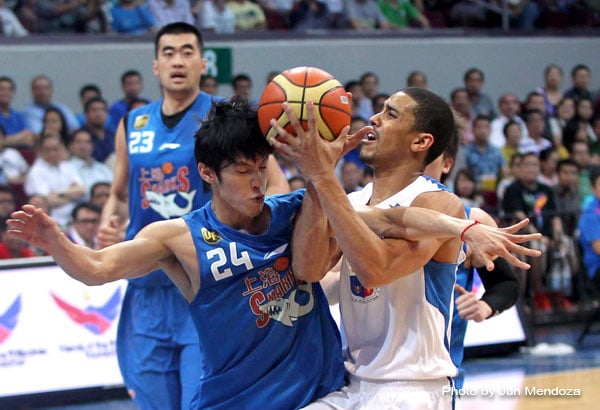 GILAS Pilipinas was given a piece of cake by Qatar earlier Wednesday. It took a lot of doing before it could eat it too.

The Filipinos came up with the firm they wanted only in the last three minutes in notching a 67-55 win over Hong Kong Wednesday and formally claim group topnotcher honors in the 27th FIBA Asia Championship at the Mall of Asia Arena.

Marcus Douthit bucked a sore shin and finished with 13 points and eight rebounds but it was the likes of Gabe Norwood and Jayson Castro who led Gilas home by combining for a fiery windup that plucked the team out of a 58-54 count.

The win was the third straight in all for the hosts and, combined with Qatar’s 71-68 upending of erstwhile unbeaten Chinese Taipei in the afternoon, gave it top spot in Group E despite a three-way tie with those two at 4-1.

By virtue of the quotient used as tiebreak the Filipinos, Qataris and Taiwanese finished in that order in the bracket with Jordan taking the fourth quarterfinals spot from the group following a 65-56 win over Japan.

Gilas next takes on Kazakhstan in the knockout quarterfinals Friday.

The Kazakhs have lost three in a row, the last two via blowouts to Korea and Iran, which relegated them to sure fourth in Group F.

The other quarterfinals pairings pit Group F topnotcher Iran versus Jordan, Chinese Taipei against China and Qatar against Korea.

The loss was the fifth in as many games in all for Hong Kong, but not after a gallant stand that saw them engage the heavy favorite home team to a long drawn-out battle.

“Give credit to Hong Kong, they had a great game off a great gameplan, but as I keep saying, there’s no such thing as an easy win,” said Gilas coach Chot Reyes.

“We started out flat and even though we only planned to give Marcus limited minutes I had to make sure we ground out this win,” added Reyes.

It also almost hurt Gilas’ cause when it made just 23 of 60 field goal tries and only drained five triples on 24 launches, compounded by Hong Kong’s doubling defense on Douthit.

But when winning time came Gilas was head and shoulder above Hong Kong.

Norwood led the charge with five straight points he laced withy a steal. Castro also had a drive and a swipe, typifying the Filipinos’ own lockdown defense in the stretch. (NC)