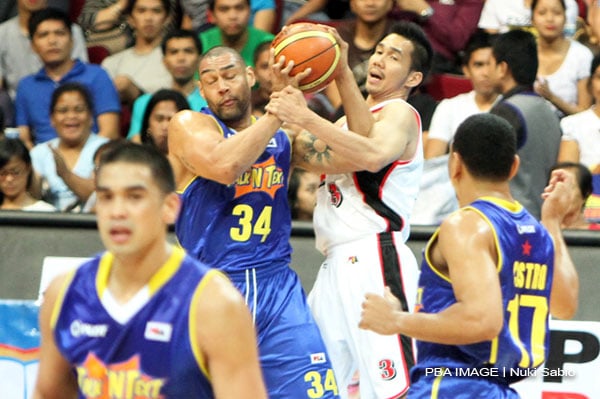 The Talk n Text Tropang Texters and the Alaska Aces braved the storm the last three days in bracing for war Wednesday.

Tropical Storm Maring joined Habagat in battering the metropolis and the surrounding provinces but that didn’t stop the Texters and the Aces from attending to their chores.

They are expected to figure in a fierce battle as they clash at 7:30 p.m. Wednesday in the resumption of the PBA Governors’ Cup at the Smart Araneta Coliseum.

It’s a battle of the champions pitting the Philippine Cup titlist and the Commissioner’s Cup titleholder.

The Aces make their first appearance since their Commissioner’s Cup title run capped by their four-game sweep of the Barangay Ginebra San Miguel Kings in the finale, plunging back into action with import Wendell McKinnes in tow.

The Texters and import Tony Mitchell, meanwhile, play their second game and chase a second straight win following their 118-113 drubbing of the Barako Bull Energy Friday.

“Talk n Text obviously is not complete and playing without pressure. But they played that first game with a lot of ‘no let up’ in them,” said Alaska coach Luigi Trillo.

“Mitchell is explosive and the other locals have stepped up their game. Wendell has big shoes to fill but I like what I see in terms of the effort and energy he brings,” Trillo also said.

“We have a good import in Tony Mitchell but we have to support him until our Gilas players come back. They’ll be missing at least three to four games,” said Talk n Text coach Norman Black.

Talk n Text, minus its Gilas Pilipinas stars, gutted it out to overcome a sluggish start, a 16-point third-quarter deficit and the fierce-fighting Barako Bull side in their tournament debut.

The Tropang Texters overhauled their huge deficit on a dizzying 21-to-nothing run and outfought the Energy in extra period to get off to a triumphant start in the season-ending tourney sans Jimmy Alapag, Jayson Castro, Larry Fonacier, Ranidel de Ocampo and Harvey Carey.

The Aces, however, could be a lot tougher challenge for the Texters with their solid local lineup and highly touted import from New Mexico State.

Trillo is hopeful McKines, who averaged 18.7 points and 10.7 rebounds as a NMS senior last year, can do the job Robert Dozier put up for the Aces in the last Commissioner’s Cup.

The Aces’ goal is to deliver their first back-to-back championships for the Uytengsu ball club since Alaska narrowly missed a second grand slam feat in 1998. (SB)