DRAFT-SHOCKER FORRESTER OUT TO UNVEIL A SURPRISE OF HIS OWN 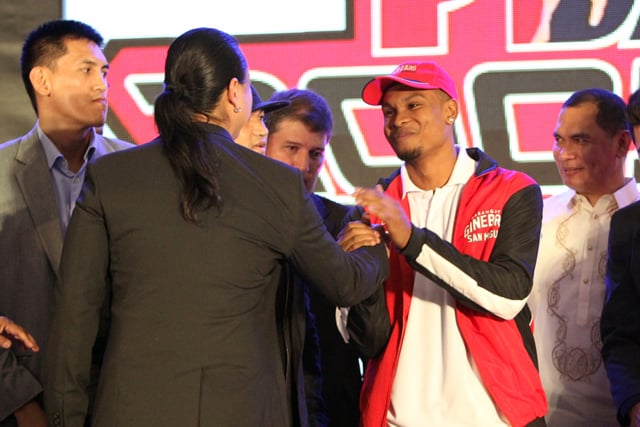 Pegged as one of the biggest surprises of the 2013 PBA Rookie Draft, James Forrester will now look to prove the doubters wrong as he aims to justify Barangay Ginebra San Miguel’s decision to select him No. 4 overall in this very deep Draft.

The 6-foot-2 Fil-Canadian combo-guard who is just fresh from his collegiate career with the Arellano University Chiefs knows that being picked by the most popular ballclub in the league comes with pressure, but he said, “I’m excited by the challenge.”

“I feel that there’s rejuvenation in my career. There was a point in my career that it’s enough of me being an amateur, and I think I’m ready for the professional league,” said Forrester.

“The Draft was perfect. I didn’t really have an off-season. I’ve been in the NCAA for almost two years and I think it made me better as a basketball player and more as a person. It prepared me for the professional league and that’s the most important part,” added the 24-year-old.

Though his selection came as a surprise for many, Forrester said that he heard a lot of people telling him what is going to happen in the Draft, but as usual, he just shrugged them off.

“People told me that I’m going to be picked fourth jokingly, but I never really had any truth about it until it actually happened. So I think of this as a blessing, a special blessing to be a part of the best team in the PBA in Ginebra,” he said.

“I’m just going to go as hard as I can. Some of the veterans in this team and the core group is very exciting to play with. We have Chris (Ellis) and Japeth (Aguilar), some of the most athletic players in the league so I’ll just try to blend with them,” he said.

When asked what can the legions of Ginebra fans can expect from him, Forrester simply said, “I won’t disappoint.” (RLeongson)