GLOBALPORT NOT DONE YET, SENDS HOLSTEIN TO SAN MIG FOR CHUA, NAJORDA 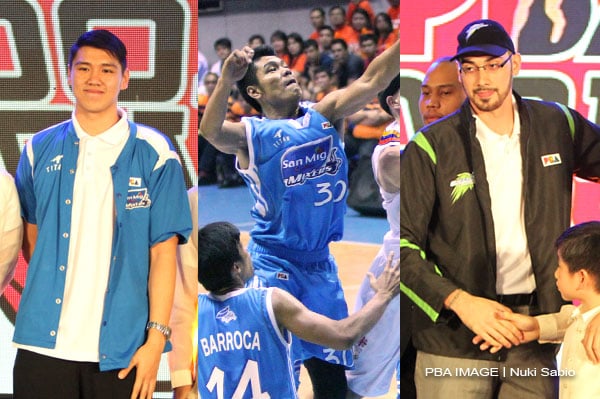 It’s still quite busy on the GlobalPort trading floor.

Just two days after the 2013 PBA Rookie Draft that gave the Batang Pier a number of the best young hardcourt talents in the land, they resumed their manpower overhaul with another deal.

GlobalPort  shook hands with newly-crowned Governors’ Cup champion San Mig Coffee Tuesday in a trade that sent this year’s No. 7 pick overall Isaac Holstein to the Mixers in exchange for No. 10 overall Justin Chua and veteran banger Leo Najorda.

It has been reported earlier that Holstein has been in the radar of the San Mig Coffee bench tacticians but the Batang Pier beat the Mixers to the draw, plucking him 7th in the rookie grab bag. The 6-8 slotman from West Virginia state University shared top honors in the vertical leap department along with eventual No. 1 overall pick Greg Slaughter in the Rookie Biometrics, reaching a height of 11 feet 6 inches.

Though he failed to make heads turn in the PBA D-League with Big Chill, San Mig Coffee head coach Tim Cone is known to work his magic with big guys labelled as projects.

In giving up Holstein, GlobalPort got two proven talents who can certainly help in the team’s determined push this coming season. Chua showed everyone that given the minutes, he can shine on his own. The 6-5 frontliner was a key factor in Blackwater’s conquest of the D-League Foundation Cup title in June. With his build, Chua can bang bodies with the big guys in the big league.

Najorda, for his part, can provide added scoring sock, aside from toughness on both ends of the floor. He can shoot from the perimeter and can likewise take the ball strong to the hoop.

In the end, both teams got what they wanted. (JL)

ADVERTISEMENT
Read Next
FROM LETRAN TO RAIN OR SHINE
EDITORS' PICK
Taal Volcano flexes signs of restiveness anew
Get exciting deals and discounts when you download the new McDonald’s App
China expands lockdowns to 25M people to halt viral outbreak
SM continues to send relief assistance to remote towns in Batangas
Beyond water service: Maynilad builds massive infrastructure projects to clean up Metro Manila waterways
BIR grants relief to Taal-affected taxpayers in Batangas
MOST READ
Taal Volcano flexes signs of restiveness anew
Lacson on Duterte’s threat to end VFA over Bato’s canceled visa: Where is the connection?
Part of Aurora Boulevard in Cubao closed from Jan. 25 – Feb. 1
Lacson presses SC to rule on international agreements like VFA
Don't miss out on the latest news and information.