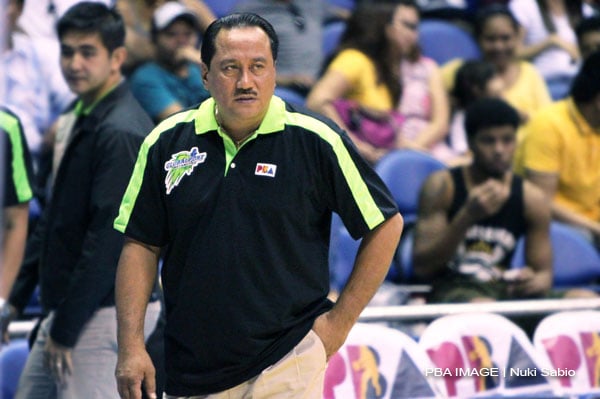 Baculi, who took over from Glenn Capacio early this year, said he had no inkling his job was on the line.

“Wala namang nagsasabi sa’kin,” he said during a break in practice at the Moro Lorenzo Sports Center. “Two days ago nga during a scrimmage with Air21, boss Mikee watched and then gave me his input on what we need to improve on; constructive criticism, kung baga,  kasi nag-relax yung team after getting a big lead.”

Baculi said Romero had even taken him aside days before the PBA rookie draft Sunday and told him: “We trust in you, just give back the trust we’re giving you.”

The news, Baculi said, came as a surprise.

Three names have been mentioned as possible replacements – the Racela brothers, Nash and Olsen, and Alaska Milk assistant Alex Compton.

Nash, coach of Far Eastern University, is an assistant to Norman Black at Talk ‘N Text.

But the thought of winning over Compton, who many believe was instrumental in the Aces’ 2013 Commissioner’s Cup championship series sweep of Barangay Ginebra San Miguel, was apparently as alluring.

Another coach whom Romero reportedly has his eyes on is Air21’s Franz Pumaren.

Any which way, Baculi seemed destined to be left out in the cold.

The veteran mentor, famous for his trigger-quick temper, as his slick-backed hair and pencil-thin moustache, was a consultant in Romero’s Harbour Centre team which won seven championships in the Philippine Basketball League.

And when the former De La Salle Green Archer decided to come to the rescue of the Philippine team in 2007 after FIBA lifted a two-year suspension levied on the country’s basketball program, Romero tapped Baculi to handle the RP team, leading the Nationals to the gold medal in the SEABA Men’s Championship and the Southeast Asian Games.

Baculi was with Barako Bull when the PBA approved Globalport’s purchase of the Powerade franchise last season. But he left the Energy Cola in November 2012 and took over from Glenn Capacio at the helm of the Batang Pier early this year.

The apparent fall from grace, as far as Romero is concerned, apparently was triggered by Baculi getting ejected with a second technical in the third quarter of a crucial playoff game with Rain or Shine in the recent Governors’ Cup.

“I won’t mind; professional naman tayo e” he said. “Pero as long as hindi pa tayo sinasabihan ni boss Mikee, I will continue to do my job. Yun ang trabaho ko. When management tells me to stop, then that’s it.”

Baculi said he would seek an audience with Romero in order to clear the air. (WJRHT)