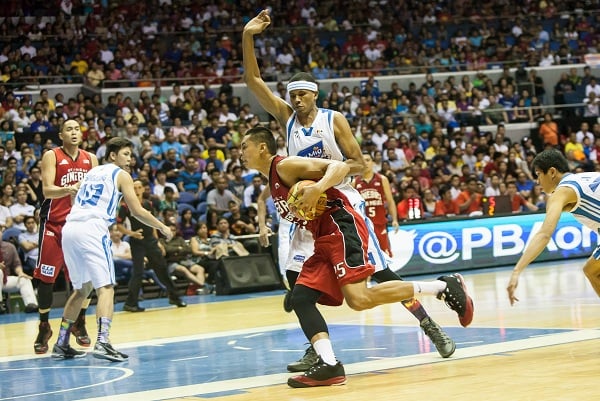 Japeth Aguilar with 18 points and 5 blocked shots. Dylan Ababou with 16 second half points, including 3 three-pointers. Greg Slaughter with 10 and 13 rebounds. JayR Reyes with 10 points.

Good thing LA Tenorio refused the offer to take the backseat, pouring 17 points and handing off 10 assists in characteristic fashion as the Kings opened the 39th season with an 86-69 thrashing of the San Mig Coffee Mixers Sunday at the start of the PLDT myDSL-PBA Philippine Cup at the Smart Araneta Coliseum.

The two starters were swept by the avalanche triggered by the new Ginebra acquisitions and a third-year player looking to recover lost ground, getting relegated to the bench in the final 20 minutes of the game after San Mig opened a 12-point advantage in the third.

More than half of a huge opening day crowd of 20,298 watched in awed silence as the Mixers took an 48-36 lead early in the third quarter on a baseline drive by James Yap and a second quarter D that held the Kings to 4 of 12.

Pre-tournament predictions were quickly getting flushed down the drain.

But these were no longer the Kings of old following the heavy team build-up they did during the off-season – through trades and the draft.

So from the bench they sprung – Eman Monfort for the Spark, Reyes for Slaughter, and Ababou, back from injury, for Ellis, joining Tenorio and Aguilar in overwhelming the Mixers.behind a rush of baskets and a tight matchup zone that forced 15 missed triples.

Three-pointers by Tenorio and Ababou roused up the slumbering offense and a defense anchored on Aguilar and Reyes snuffed out San Mig’s inside game as the Kings roared back to take the lead, 54-52.

A free throw by Rafi Reavis, following technicals on him and Reyes for jawing, gave the Mixers back the lead, 55-54. But Reyes, swapped by Meralco for Kerby Raymundo, ended the third quarter with 4 straight points as the Kings crowd erupted back to life.

The Mixers never regained any footing from there, with Caguioa, who appeared to enjoy the Ginebra breakaway materializing without him, declining a curtain call in the closing minutes.

He finished with 2 points on 0 for 4 shooting.

“I told them not to lose their focus,” Ginebra coach Ato Agustin said. “But we really struggled sa umpisa.”

The Mixers were a woeful sight in the end, with 2 of 17 shooting from 3-point range and 18 turnovers which yielded 25 points for the Kings.

Mark Barroca, with 14, was one of only two San Mig players in double figures, with Yap held down to 8, missing 2 3s and 8 of 12 charities. Even Marc Pingris seemed lost among the trees with 7 points and 6 rebounds.

Ababou, a UAAP most valuable player in 2009 with University of Santo Tomas, suffered a torn ACL in his right knee last November and came close to getting traded during the off-season.

That option just got thrown out the window after his sterling shooting performance that forced Ellis to the bench.

Agustin sees no problem in his rotation.