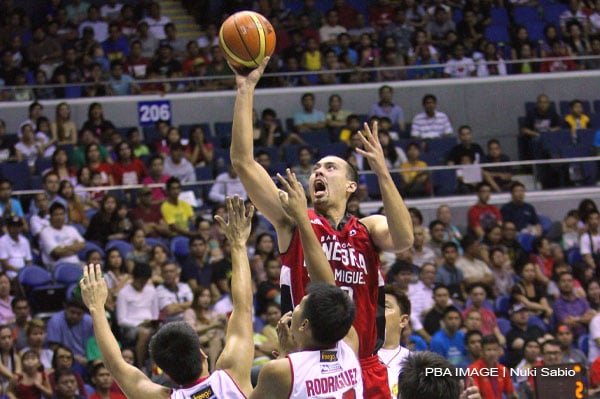 Barangay Ginebra’s good potential with its improved lineup was very evident for a second game in a row in the new PBA season.

After mangling San Mig Coffee in their first game, the Gin Kings returned to manhandle the Rain or Shine Elasto Painters, 97-84, and remain one of the three remaining unbeaten teams in the PLDT MyDSL PBA Philippine Cup.

Before a good weekend crowd at the Smart Araneta Coliseum, Mark Caguioa topscored with 22 points while the towering frontcourt duo of Japeth Aguilar and Greg Slaughter combined for 37 markers and 23 boards as the Kings dealt the Elasto Painters a first loss in three starts.

The Kings imposed themselves early, erecting a huge 17-point spread right in the opening frame and going on to score a follow-up on their 86-68 rapping of the Mixers during the season inaugurals in the same venue.

“Iba talaga pag may matangkad ka. With our big guys out there, we controlled the boards and dictated the tempo,” said Ginebra coach Ato Agustin.

The Kings were simply tough to handle with Caguioa doing his fireman’s role, Aguilar and Slaughter asserting themselves at the paint and LA Tenorio doing a brilliant playmaking job.

Caguioa, Slaughter, Aguilar and Tenorio were all there on the floor as the Kings repelled a RoS rally then reestablished control at 85-66 in the fourth quarter.

Despite tough match-up problems, the Elasto Painters hung in there in the first 40 minutes of play.

Behind Ryan Arana, Jeff Chan and Beau Belga, Rain or Shine waged a searing chase in the third period, coming within two at 62-64.

Curiously after a near fight between Belga and JayR Reyes, the E-Painters blew cold, scoring only four points in the next nine minutes of the battle.

Slaughter poured in 10 of his 18 points in the fourth period while Aguilar executed a electrifying breakaway jam in a run that had the Kings breaking away for good.

Chris Ellis, making the starting five with Caguioa, Slaughter, Aguilar and Tenorio, contributed nine points on perfect 3-of-3 field shooting and 3-of-3 charities.

Arana tossed in 21 to lead the Rain or Shine scorers.

Rookie Raymond Almazan had a decent stand against Slaughter, coming through with nine points and the same number of rebounds.