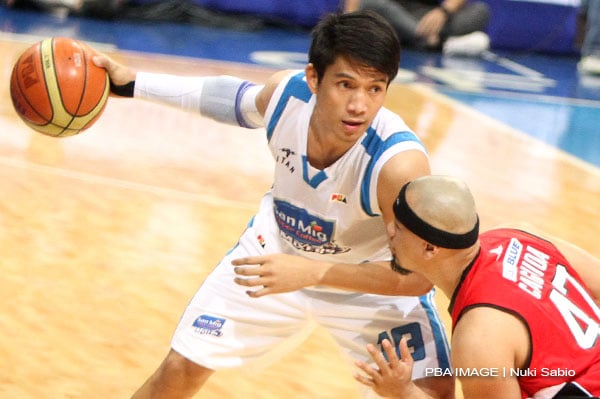 James Yap found himself Saturday in the very same spot he was in the last time out, and he grabbed the opportunity to turn things around.

Yap rifled in the biggest shot – a triple with 13.4 ticks left – as San Mig Coffee beat out Barangay Ginebra, 79-76, in a nerve-wracking battle to take the pivotal 3-2 lead in their PLDT MyDSL PBA Philippine Cup best-of-seven semifinal series at the Smart Araneta Coliseum.

“In the old days, this team would go to Alvin (Patrimonio) at the post. Nowadays, we go to James (Yap),” said San Mig Coffee coach Tim Cone.

In Game Four, the Kings escaped with an 85-82 thriller with a three-point try by Yap rattling off the rim at the buzzer.

With the game again in the balance Saturday, the Mixers stuck with Yap, and the two-time MVP bailed him team out this time.

“Mark (Barroca) knew James is an option,” said Cone of the play that saw their three-year playmaker set up Yap for the key shot giving the Mixers a 78-76 lead.

LA Tenorio missed two drives in the last 10 seconds, allowing the Mixers to grab the decisive victory and move in the threshold of a second straight PBA finals.

After Justin Melton made it 79-76 with a split from the line, Tenorio, curiously, again went for a drive instead of going for a three-pointer.

“I wasn’t sure myself if we’re up by two or by three, and I can’t blame LA. He got caught up in the moment,” said Cone.

“It’s hard to stay calm in that basketball game,” Cone also said of the fierce battle marked by five deadlocks and 14 lead changes.

The Mixers played steadier in the crunch, thus, emerging victorious with a chance to set a repeat of their 2012 Governors Cup title showdown with the Rain or Shine Elasto Painters.

“It’s the ‘Manila Classico.’ It should come down to that last possession,” said Cone.

Bungling that possession, Tenorio ended up the goat with two misses in the last 10 seconds going with six turnovers in what’s easily one of his sloppiest performance in the tourney.

Yap was 3-of-15 from the field but banged in the shot that they needed the most.

The Mixers took the biggest lead in the game at 66-57 on a 10-to-nothing run in the fourth quarter but the Kings were quick to fight back, unleashing a 15-6 counterattack to pull even at 72.

And the two teams engaged in a toe-to-toe battle to the finish.

A 15-foot jumper by Chis Ellis gave Ginebra its last taste of the lead at 76-75 then Yap got his big moment. (SB)