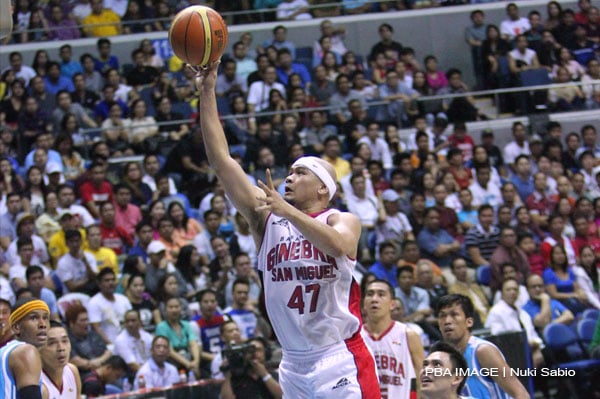 LA Tenorio redeemed himself from his Game Five boo-boo and Barangay Ginebra San Miguel responded to the call of its faithful, staying alive in the fight for the second berth in the PLDT myDSL PBA Philippine Cup Finals.

The Kings fought a great battle with their big fighting heart, drubbing the San Mig Super Coffee Mixers, 94-91, to force a deciding game in their best-of-seven semifinal showdown at the Smart Araneta Coliseum Monday night.

“Nakuha namin yung right formula. We have to pressure, we have to be aggressive and we have to pour out all our energy,” said Ginebra coach Ato Agustin.

“Malaking bagay din yung ginawa ni coach (Robert) Jaworski. He entered our dugout at the half and tried to inspire our players,” Agustin also said.

Tenorio made a crucial turnaround from his Game Five endgame foul-up, and said he’s inspired by Jaworski and the Ginebra fans.

Tenorio sparked Ginebra’s chase from a nine-point deficit at the half before Mark Caguioa and Greg Slaughter took over in the crunch as they forged a 3-3 deadlock in the series.

“Coach Jawo told us to enjoy the game and give what our fans deserve,” said Tenorio on Jaworski’s  pep talk during the halftime break.

And egged on by the Ginebra crowd all game long, the Kings refused to lose, thus staying in the fight for the right to play Rain or Shine in the Finals.

Caguioa and Slaughter teamed up for Ginebra’s 6-0 windup, and the Kings whooped it up with James Yap misfiring a trey at the buzzer.

Tenorio piled up with 16 points, three rebounds and three assists and, at the buzzer, found himself in a warm embrace by celebrity friends Billy Joe Crawford, Reyver Cruz and Zanjo Marudo – all in Tenorio jerseys.

Tenorio shifted to high gear in the third quarter, firing away two clutch three-pointers as the Kings rallied to with one, 73-74, going into payoff period.

Justin Melton and Mark Barroca scored back-to-back baskets off steals as San Mig Coffee enjoyed its first of two 14-point spreads in the first half at 46-32.

This quick San Mig backcourt pair also stood at the forefront of their key 13-4 run at the start of the second quarter, giving the Mixers their initial double-digit margin at 37-26.

Melton and Barroca had put together 15 points, six assists, three steals and two rebounds as the Mixers sat on a 50-41 cushion at the half.

The Mixers set the pace in the first 24 minutes while shooting 47.6 percent from the field as against the Kings’ 42.4-percent clip. San Mig Coffee outscored Ginebra, 10-2, on fastbreaks and, 11-6, off offensive rebounds.

The Kings stole the show in the end though. (SB) 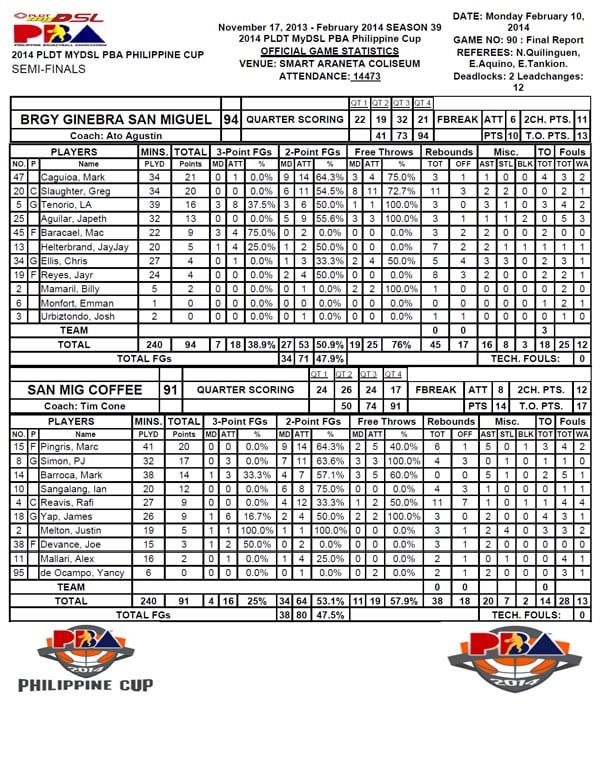