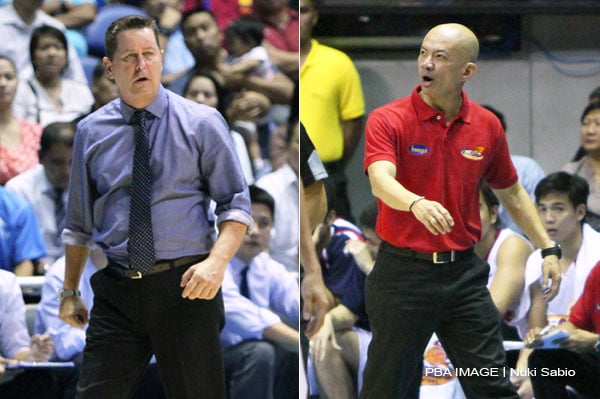 REVENGE is in the air in the PLDT myDSL PBA Philippine Cup Finals, and Tim Cone, coach of the San Mig Super Coffee Mixers, may have just thrown the first jab at the direction of Rain or Shine counterpart Yeng Guiao.

During Thursday’s Finals press conference at the Sambokojin Restaurant in Libis, Quezon City on the eve of Game 1 of the best-of-7 championship series, Cone made crystal clear – for Guiao and the Elasto Painters to hear – the significance of winning this conference.

“If you win the Philippine Cup, you’re the best coach in the country,” said Cone, who is chasing his fifth All-Filipino crown since the 2000 season.

Whether Guiao, who has yet to land one in three or four tries, overheard Cone’s subtle dig, he betrayed no emotion. If he did, one could be sure he was seething inside.

It was all smiles and banter and mutual admiration from both coaches that afternoon – Cone gunning for the all-time record of 16 championships to surpass the legendary Baby Dalupan and Guiao seeking his seventh. But once the question-and-answer forum and the photo-op were over, both their faces turned grim and serious.

So did their respective players’ demeanor although Rain or Shine’s Beau Belga and San Mig’s Marc Pingris , both members of Gilas Pilipinas, enjoyed some uproarious exchange during the session, with the burly Belga vowing in jest: Babanatan ko yang si Ping.”

On the way down from the second floor feast, Rain or Shine hotshot Jeff Chan gave San Mig playmaker and fellow Far Eastern Tamaraw Mark Barroca a playful nudge down the stairs, although nothing that could have resulted in a dreadful accident.

But come Game 1 at 8 Friday night, when the stakes are higher than a plateful of cold sashimi and grilled bulgogi, the gentle push could turn into a hard shove.

The Mixers, then known as the B-Meg Llamados, will be motivated by their Game 7 loss in the 2012 Governors’ Cup Finals that gave the E-Painters their first ever PBA title.

Cone knows what they’re up against.

“We have a lot of respect for Rain or Shine; they got our number the last few times,” said Cone, whose Mixers ruled the 2013 Governors’ Cup. “We were looking to win back-to-back titles back in 2012 when they beat us. Now we’re again trying to win back-to-back and we still have coach Yeng and his team in front us. They’re a big hurdle.”

Guiao sees no relevance however in their past success with San Mig.

“It doesn’t matter. It’s a whole new story,” said Guiao. “They’ve gotten better, bigger. They’re a different team from when they struggled at the start of the conference. The biggest mistake we can do is to believe we got their number because we don’t.”

The ease with which the Mixers destroyed Barangay Ginebra San Miguel in Game 7 of their semifinal series should be immaterial against Rain or Shine, which has enough defensive players to take on James Yap and PJ Simon, whose hot shooting against the Kings came down as one of the deadliest performances by a backcourt pair in the PBA’s history.

And with Belga looking forward to clobbering Pingris, who snuffed out Ginebra’s Twin Towers with his ferocious rebounding and shot-blocking, the E-Painters will have no shortage of people who can match up with San Mig’s best.

More than the rust, Guiao believes the week-long rest they enjoyed after dispatching Petron Blaze in five games have allowed them to “heal our bodies, clear our minds, and not think about anything for a few days.”

He hastened to add though: “But I don’t know if that will be an advantage.”

Now they’ll be seeing James Yap and the Mixers even in their dreams.

PBA commissioner Chito Salud sees a “tough series between two teams that have been consistent” the whole conference.

“Fans will see two quality coaches who are masters of the game. And for the fans’ sake, I hope it goes the distance.”

Guiao knows who he wants to be identified with.

Told that Cone has been referring to Rain or Shine as the San Antonio Spurs of the PBA, Guiao quipped: “Just call me Pop.”

Salud sat beside Guiao, who was slapped a one-game suspension on top of a P100,000 fine after Game 4 against Petron for unsportsmanlike acts, and the two men appeared to have put behind them their differences.”

Asked if he could say with certainty that he wouldn’t get ejected in the finals as what happened twice in the semis, Guiao said he couldn’t.

“I don’t want to guarantee anything,” said Guiao. “I don’t want to be just watching my team from somewhere. But I have to express my point. Now that I’ve made it, I’ll leave it at that. Officiating is a public issue. Di lang players kundi pati officiating ang pinapanood. It’s part of the whole deal. I’m sure referees will not be perfect, tanggap namin yon. We’re aware things are being done. So we’ll try to do our job and let them do theirs.”

PBA chairman Mon Segismundo of Meralco extolled the record-breaking crowd in Game 7 of the semis between San Mig and Barangay Ginebra which reached 24,882.

“That was great, but I believe the finals will continue to be heavily watched by our venue fans,” Segismundo said. (WJRHT)