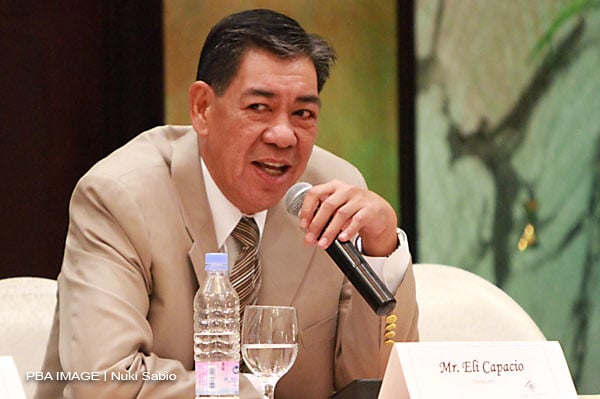 Tributes of praises and salutes continued to pour in for the late former PBA chairman Eliezer “Ely” Capacio two days after his passing.

Among the most glowing testimonials came from his peers from the PBA Board of Governors whose lives he had touched with his huge presence – literally and figuratively.

“Ely Capacio was my YCO idol. Being with him in the PBA Board for three years was a real blessing. He always fought for what was right and not necessarily the political or most convenient route,” said current PBA chieftain Mon Segismundo.

“Loyalty to the PBA and the sport he loved best trumped narrow organizational lines. He is the type of sports executive our basketball nation needs. We will badly miss him,” Segismundo added.

“He will be missed,” said Salud.

So overcome by emotion, longtime Purefoods and SMC buddy Rene Pardo couldn’t utter a word. His praises came in one salute.

“Ely, I would say, is the most complete and successful pro player in the whole of PBA. His legacy is unmatched,” said another longtime SMC pal and kumpare Robert Non.

“He is a guy who anybody can relate to easily. He is very passionate in what he does and you can say he is a man of vision,” Non added. “I will truly miss him – his commanding voice, his jokes, his laughter and most especially friendship.”

“We are saddened by the sudden passing of Ely Capacio, an esteemed member of the professional basketball community. His intelligent and analytical approach to the issues faced by the Board of Governors shall be greatly missed,” said Rain or Shine’s Mert Mondragon.

Capacio served as PBA Board chair in the 2005-2006 season, hurdling the test with flying colors.

“Somehow, I inherited from him the leadership qualities that made my PBA chairmanship somewhat easy and successful,” said Non, the Board chair in the highly successful 2013 PBA campaign.

With Capacio at the helm, the league rose out of the doldrums, starting to post eye-popping figures for live gate attendance, television ratings and gross earnings.

He was among those real educated players earning a degree in Liberal Arts, major in Behavioral Sciences and sub-major in Psychology at La Salle, and Masters of Business Administration at the Asia Institute of Management.

Thus after playing and coaching, he was well equipped when he plunged into the corporate world. (SB)