BABY, ELY & THE MIXERS’ AMAZING RIDE TO THE TOP 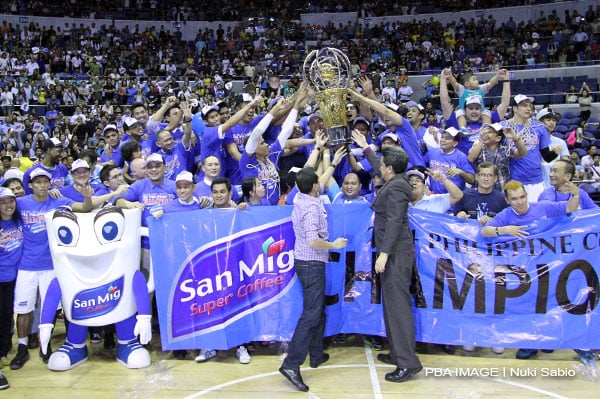 ALTHOUGH he has already etched his name among the icons in the team now known as San Mig Super Coffee, Tim Cone is not remiss in acknowledging those who came before him.

Foremost among those Cone paid tribute to was the legendary Virgilio “Baby” Dalupan, who Cone just passed as the winningest coach in PBA history.

“I’ve said it before and I’ll say it again, no one would ever equal Baby. He’s one of the greatest in the world,” said Cone moments after his Mixers beat Rain or Shine, 93-87, last Wednesday to cop the PLDT myDSL PBA Philippine Cup championship at the packed Smart Araneta Coliseum.

“Imagine 41 championships won in the UAAP, NCAA, MICAA and the PBA,” added Cone. “I’m just thrilled to bring Baby Dalupan back in the consciousness of PBA fans. I’m thrilled to be part of his legacy.”

Like what he did after tying Dalupan through the 2013 Governors’ Cup plum Cone can’t help but relate his vivid recollections of the only time he crossed paths with Dalupan in the Finals, during the 1990 Third Conference while he was still with Alaska and the latter was calling the shots for Purefoods.

“And he swept my ass in three games and won that championship. That was like it was my first time in the Finals. Alaska hasn’t won a championship yet, and we’re so sure we would win that thing,” added Cone.

“But he just tore my heart out and then maybe, he retired two conferences later after that. So that’s my claim to fame. I was able to coach in the Finals against Baby and get beat.  That’s the proudest thing, to coach against him and get beat.”

Another franchise icon Cone did not forget was former PBA Chairman Eliezer “Ely” Capacio, who passed away early Sunday morning and was not around for the grand finish of the team he coached to the 1991 All-Filipino title.

Indeed, Dalupan and Capacio would have been, along with the predominantly pro-San Mig crowd of 20,337 paying fans.

The victory enabled San Mig to wrap up the best-of-seven series at 4-2 for the franchise’s 11th title in all and sixth in an import-less conference, which is the most in the league.

At the same time, Cone moved a crown ahead of the long-retired Dalupan in the all-time list.

There were other milestones reached as well as San Mig is the lowest seeded team to emerge champion since No. 6 Ginebra copped the 2004 Fiesta Conference title and the back-to-back title romp is also a first for the franchise which carried the brand names Purefoods, Coney Island and B-Meg.

Yet its latest win should rank as one of the greatest pulled off by the franchise, which joined the league in 1988 and Cone joined only prior to the start of the 2011-12 season.
The 4-2 triumph in the best-of-seven title showdown capped a wondrous run that only the staunchest Mixers supporters believed would happen following the way in which the team opened up the season.

Following a 1-5 win-loss start, San Mig became healthy enough to go on a tear closing out the 14-game eliminations and wind up fifth. It then beat fourth-ranked Talk N Text in the quarterfinals and went the full seven-game route against top seed Barangay Ginebra in the semifinals before hurdling the second-seed Elasto Painters.

No wonder Cone found it hard to describe the emotions that were gripping him.