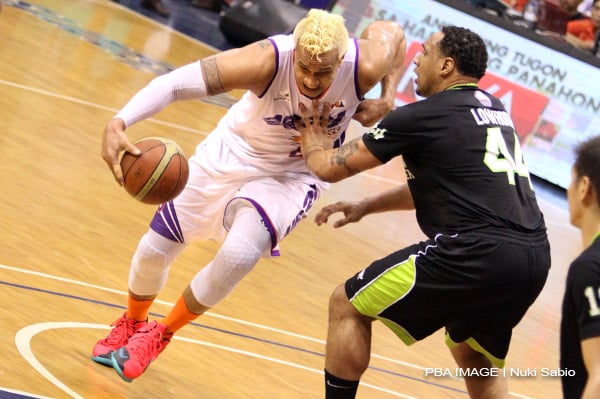 After Dior Lowhorn scored on a baseline reverse late in the second quarter, his elbow accidentally hit Asi Taulava’s left eyebrow, which left the latter profusely bleeding with a boxer’s cut.

Taulava taped that cut up and returned to the game in the second half, until the gash bled once more.

Sensing urgency in this second-to-the-last game for his team, Taulava asked the medics to just double the plaster on his injury as he returned minutes later in the third.

“We can’t afford to lose this game. After the game, then we can go to the hospital,” Taulava said.

And his gamble paid off, as Air21 drubbed GlobalPort, 106-102, Wednesday in the 2014 PLDT Home Telpad PBA Governors’ Cup at the Philsports Arena.

With a 5-3 record, the Express win kept them at the thick of things and still in contention for the top four spots in the quarters which comes with a twice-to-beat incentive.

But the game eliminated the Batang Pier (1-7) from a chance at the playoffs.

“What a game. Kudos to my family – my team Air21, my players. In spite of us looking so tired, we were able to suck it up,” said Express head coach Franz Pumaren.

Dominique Sutton came away with a huge 28-point, 20-rebound, and six-assist outing for Air21, while Taulava, playing hurt for the majority of the second half, flirted with a double-double with 17 points and nine rebounds.

“I was ready to bite the bullet already knowing the gladiator in him. He told me during halftime that he just had the first aid thing that closed the wound for a while and he can come back. He wanted to finish this,” Pumaren said.

“Actually, the way I look at it, it was really meant for us. Just imagine the loose ball rebound, the tap went to the hands of Asi Taulava,” he added.

The outspoken Air21 coach was noting several instances in the final minute where it was Taulava who got hold of the ball.

First, Joseph Yeo flubbed a three-pointer, which triggered an erratic loose ball and ended up with Asi getting hold of the rock and being fouled by Eric Menk at the 55.3 mark.

Next was a good defensive sequence for GlobalPort, forcing Sutton to pass the ball to Yeo, who then got his fingers tipping the ball in the air and ending up with Taulava once more, as the 41-year-old scored on an undergoal stab with 23.5 to play.

And on the two crucial Batang Pier three-point misses, first from Ronjay Buenafe and the next from Alex Cabagnot, it was Taulava who secured the rebound.

“I guess it compensated what happened to Asi,” Pumaren said. “I think he’ll be getting at least seven to ten stitches, but I think this game was really meant for us.

I just love this team right now. We were able to hang tough. And even when they made the run, we still stayed on the course, which is a good thing for us,” he added.

The Express raced to a 15-0 advantage early on and led by as big as 16, until GlobalPort slowly nipped away the lead to make a game out of it.

An inspired third quarter closed the Batang Pier to just one, and finally grabbed the advantage in the fourth, but Jonas Villanueva, Taulava, and Sutton woke up midway in the payoff period to take Air21’s fifth win in eight games.

“We have a goal. We have a mission to accomplish and we got one already. Hopefully, we can get another win come Saturday. It’s a good thing that we still have two days before we face San Miguel Beer. At least, it would give us time to get some energy going. We have to come up with much better energy,” the Air21 coach said. “At least for this game, we started strong, we were able to finish tough and we were able to finish strong.”

“It’s so hard to play a team that has no pressure at all. They’re going with the emotion, but to give credit to them, they really shot well,” Pumaren also said of GlobalPort.

Lowhorn scored 13 of his 35 markers in the fourth, alongside his 10 rebounds, while Alex Cabagnot just fell short of a triple-double with 19 points, 10 assists, and eight boards.

Jay Washington had 19 while Ronjay Buenafe knocked down 16. (RL)