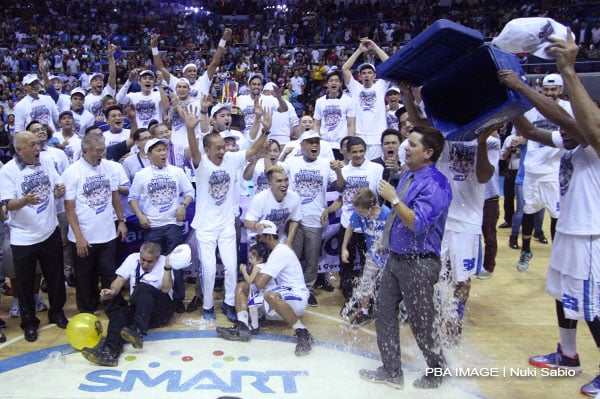 Coach Tim Cone could barely remember the first time he won a Grand Slam with Alaska way back in 1996.

In front of 23.234 cheering fans inside the Smart Araneta Coliseum and against a very tough Rain or Shine squad, San Mig Coffee held on and came away with a 92-89 victory in a Game 5 classic to win the 2014 PLDT Home Telpad PBA Governors’ Cup, three games to two, and nailing the rare Grand Slam feat on Wednesday, copping all three championships in the 39th season of the league.

Actually, it was the fourth straight championship for San Mig, and the 13 total ties the Mixers with Crispa for the third most championships in PBA history. In the process, Cone became the only coach to have recorded two Grand Slams.

“This championship, this four-peat, this Grand Slam hasn’t hit me yet. I’m overwhelmed by it,” Cone said. “Every time that we came into a big game, I’d say this is the time it ain’t going to happen. We play with fire too much, it ain’t gonna happen. Somehow, the guys found a way. We do it again, get to a Game 7 or Game 5 or even a Game 3, it ain’t gonna happen this time. The odds are not in our favor and the guys again just found a way.”

James Yap was magnificent all game long, finishing with 29 points, his best outing in the four straight San Mig Finals appearance, shooting 12-of-18 from the field. He also had eight rebounds. He earned the nod as PBA Press Corps – Holcim Cement Finals MVP.

Marqus Blakely defended his Governors’ Cup crown with a near triple-double with his 20 markers, 16 boards, and eight assists, as Joe Devance canned 11 points and eight rebounds.

Marc Pingris also ended up with a double-double with his 10 points and 11 rebounds, while Peter June Simon had 10 markers.

“It’s been amazing to watch them. To watch a guy like Ping who brings the energy every game. There are just those times when he’s truly ubos – he’s got nothing, and you can see it in the games and you think, ‘uh-oh. That’s it.’ And the next game, he comes back and he’s just everywhere. His will to recover and continue to play.”

“And the calmness of James Yap. We were talking about it before the game and we really have guys who are pumped up. Everybody was so intense and James is in the corner, kind of relaxed. I told the coaching staff that’s why he’s Big Game James. Nothing fazes him. He just comes out, plays calmly and is able to withstand the big moments, and tonight, he played that big moment.”

Cone also praised Blakely, saying, “Him coming back back-to-back, it means so much. He started it for us and he finished it for us.”

San Mig Coffee erected a 16-point lead midway in the third before Paul Lee, Raymond Almazan, and an ailing Arizona Reid joined forces in a 17-4 blast to close the period and nip the Coffee Mixers’ lead to just three, 73-70.

The E-Painters still got to as close as one with a basket from Jonathan Uyloan that opened the fourth quarter, but San Mig answered right back with a 9-2 run to pad its lead to eight, 82-74.

Rain or Shine then fought back and once again narrowed the gap to 90-87 going into the last two minutes.

Yap recovered the ball from the right elbow, evaded two defenders and hit an off-the-glass one-hander, but Reid quickly answered with a bucket of his own to make it 92-89 with 1:32 left.

Yap and Mark Barroca missed a couple of jumpers in the final minute, which still gave Rain or Shine a glimmer of hope. However, Paul Lee muffed an open corner three with 26 seconds left.

San Mig just couldn’t get some breathing room as Yap missed a pair of freebies. Beau Belga grabbed the rebound to give ROS possession with 23.6 ticks left.

Jeff Chan and Lee then missed treys, but Barroca still left the door wide open for the E-Painters, as he went 0-for-2 from the charity stripe with 6.2 seconds to go.

But it just wasn’t meant to be for the Elasto Painters. Reid could not make his last-gasp trey, sending the Coffee Mixers to a wild celebration as time expired.

Reid had 19 of his 23 points in the second half alongside his 14 rebounds, and Lee finished with 21 markers.

“Just watching the journey we had and being able to watch these guys and just observe them, it was truly an honor,” Cone said. “I don’t know if it was the hardest Grand Slam to win out of the five, but it’s got to be one of the hardest. The schedule, the consecutive games every day. We had two days off in June and somehow we figured out to make it to this last day and now, we have a chance for a break. I’m consumed with it every day, and now, I’m gonna go crazy without anything to do. It will be a nice crazy though.”

“I have to sit at home in a quiet room with the lights off and close my eyes, let this thing sink in. This didn’t seem possible, even for me. Eighteen years ago was such a special moment and I told the guys, you only get to do that once in your life and me and (assistant coach) Johnny (Abarrientos), we’ve been able to do it twice. That’s just two blessings,” he added.
“I told the players, this is gonna be the best time of your life right now. This is the one you’ll always remember in your career, winning that Grand Slam. It’s a special moment for all of us.” (RL)