TEXTERS AIM TO USE ELITE AS STEPPING STONE 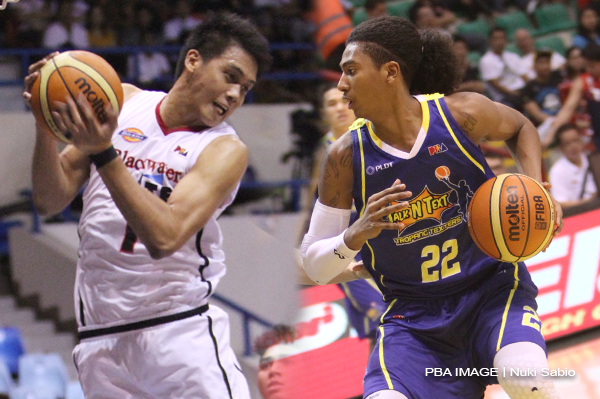 TALK N Text is eyeing a big finish in the PBA Philippine Cup eliminations and Blackwater should help.

The Tropang Texters resume their quest for an automatic semifinals slot when they take on the eliminated Elite Saturday in a Petron Blaze-sponsored match at the Alonte Sports Arena in Biñan, Laguna.

Should TNT win as expected, then they will be all pumped up heading to their last elimination round assignments against Purefoods Star on Wednesday and San Miguel Beer two days later.

Provided the Texters win both those latter matches and either or both Alaska and SMB fail to notch more than eight wins, a possible tie for a top two spot and their corresponding automatic semis rewards would ensue, one that would be broken by quotient.

But even TNT coach Jong Uichico knows Blackwater could be a handful, notwithstanding its winless record.

The Elite have simply been hard-put to match up against the PBA’s more established players, their chances of putting up a decent showing greatly dampened when they got struck by injuries at one time or another to the more veteran players in Sunday Salvacion, Alex Nuyles, Larry Rodriguez, Eddie Laure and Gilbert Bulawan.

According to coach Leo Isaac, Salvacion has been dropped to reserve due to his recurring calf muscle injury while Rodriguez remains day-to-day due to his knee injury.

Bryan Faundo, Paul Artadi, Ogie Menor, Bambam Gamalinda and Chris Timberlake have been trying to carry the cudgels for Blackwater, but to little or no avail.

Aside from Gamalinda and Faundo, who lead the team in scoring but not even at 10 ppg each at that, another bright spot for Blackwater is rookie playmaker Brian Heruela.

In only his third game, the 26th overall pick in the draft finished with 19 points and six assists in an 82-97 loss to Barako Bull last Wednesday, the same team TNT handily beat by 16 points the Sunday before.

Whether Heruela, who was June Mar Fajardo’s primary feeder during their University of Cebu days, can again come up with the same plays against a TNT team that has Jayson Castro, Jimmy Alapag, Ryan Reyes and Aaron Aban is one big question.

The Texters are also simply more loaded in the other positions with Ranidel de Ocampo, Jay Washington, Larry Fonacier and Harvey Carey.

But as what Isaac has repeatedly stated, Blackwater will keep on trying to bring out its best for the game. (NC)