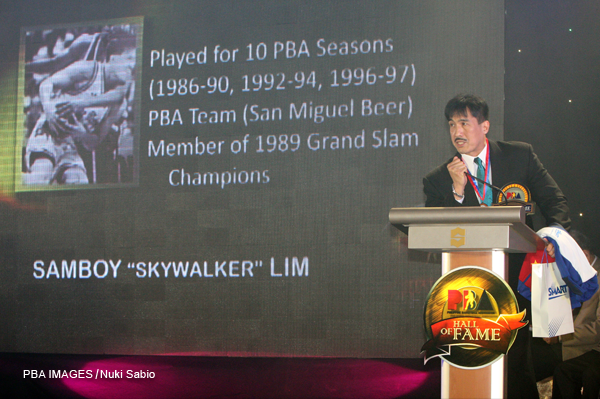 The Philippine basketball scene was shocked when the news of PBA legend Samboy Lim collapsing during a charity basketball game made rounds in social media on Friday night.

As of press time, Lim, 52, is still in the ICU of Medical City in Ortigas in what many deem was a heart attack during a Legends’ game at the Ynares Sports Arena in Pasig.

For the guys who know him, the news was quite unnerving

A former teammate and coach of Lim, Black had to finish the Bolts’ game against, coincidentally his and Samboy’s former squad, San Miguel Beer, before he could rush to the hospital.

“(San Miguel assistant coach) Biboy Ravanes told me before the game that (Lim) collapsed. It puts everything in perspective. It’s always what you do in life. The fact that I’m still involved with basketball, but when you talk about life and death, it’s a different story,” Black said. “After the game, Biboy told me that he’s comatose.”

Together, Black and Lim led the Beermen to nine titles, including the 1989 Grand Slam where the former served as a player-coach, making it more heart-wrenching for Black when he got the news.

“We won a lot together. We’re family. We went to war together, and nine times, we came out the winner,” Black said. “He’s a great player, a great person, great attitude, hard worker, had a little bit of bad luck with injuries, but still, he’s probably the second most popular player in the league behind (Robert) Jaworski. I had a lot of good memories with Samboy.”

Danny Ildefonso, one of the key cogs of the Beermen in the 2000s also reminisced his time with Lim, saying, “Magaling sya mag-magic ng coins.”

Though the two did not play with each other, the Skywalker and the Demolition Man crossed paths in the PBL in 1998, when Lim played his post-PBA career with Welcoat as Ildefonso suited up for AGFA.

Lim later served as the team manager for San Miguel when they won the 2005 Fiesta Conference with import Ace Custis.

“Sobrang bait, masayahin, at tahimik na tao ni Papa Sam,” Ildefonso said of Lim, also adding that a lot of the principles he lived by in his career were taught by the PBA great.

San Miguel greats like Allan Caidic, Pido Jarencio, and Nelson Asaytono were present at the hospital to give moral support to one of the league’s 25 Greatest Players. The Beermen squad were also one in praying for the speedy recovery of Lim.

An 11-year PBA veteran, Avelino “Samboy” Lim Jr. was taken by the Beermen in the 1986 Draft as the third overall pick from Colegio de San Juan de Letran and played the rest of his career with the San Miguel franchise before retiring in 1997.

Known for his acrobatic hangtime moves, he was given the moniker “The Skywalker.”

Children and loss: How Kidlat de Guia’s family is coping