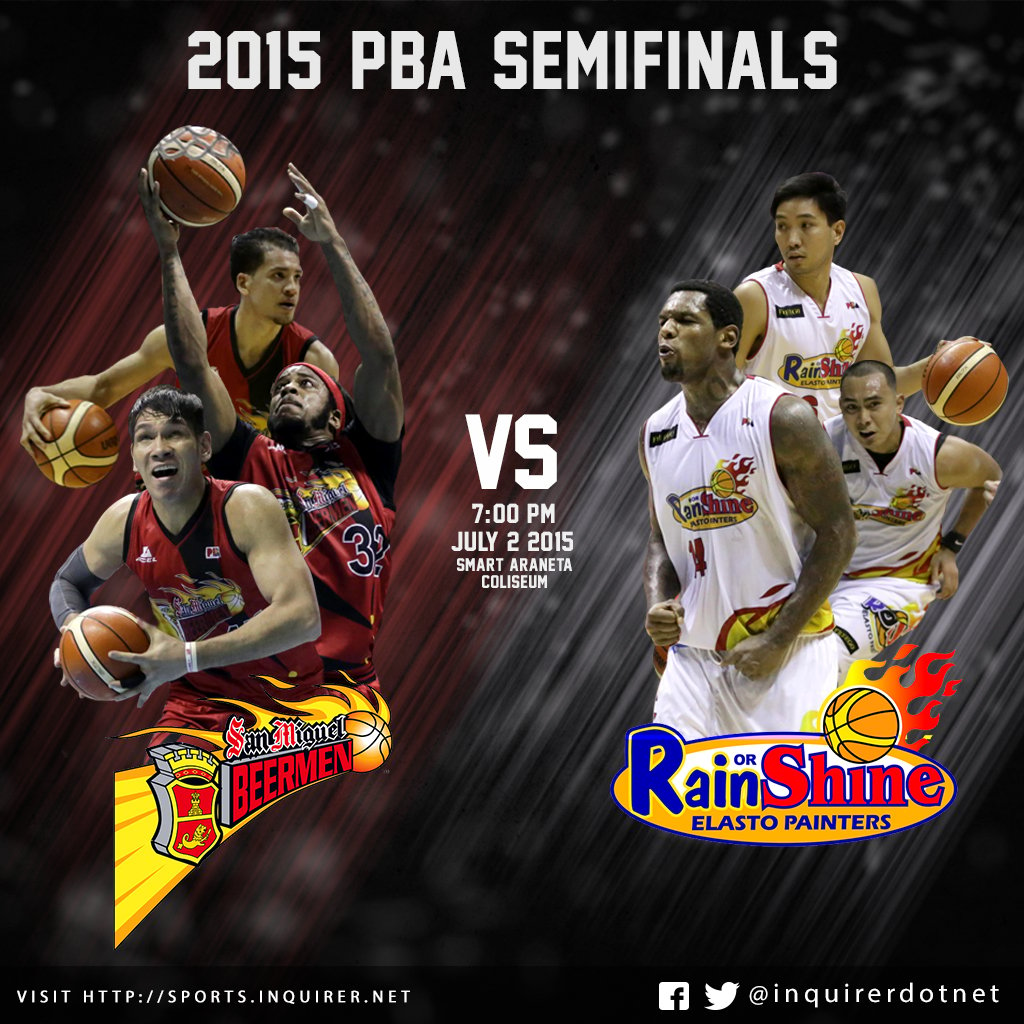 Solving the puzzle each side is sure to offer is the primary concern of both San Miguel Beer and Rain or Shine when they start their 2015 PBA Governors Cup semifinals duel Thursday evening at Smart Araneta Coliseum.

The opener of the best-of-five series may not mean much in the long run, but should offer a glimpse of the areas the Beermen and Elasto Painters could improve or adjust on.

“Every time we play SMB our biggest concern is the size of June Mar. He’s always been a matchup problem for us,” admitted Guiao.

That’s not to say the duel would be a one-sided affair.

Although Guiao only has 6-foot-6 Beau Belga, 6-5 JR Quinahan and 6-7 beanpole Raymond Almazan to throw at the 6-10 Fajardo, he draws optimism from the fact he has other tools at his disposal to turn the series in his E-Painters’ favor.

“I’m confident we can manage the import match-up and the guard match-ups,” said Guiao. “We concede that they have more talent and a deeper bench but we will rely on our chemistry and experience together.”

That is precisely what gnaws at Austria. “Malakas ang Rain or Shine, kasi they’re full of experience, seasoned,” said Austria.

“They have been in the playoffs the last nine conferences, even going deep at least four times. So that tells a lot kung ano’ng klaseng quality team sila.”

The imports indeed should cancel each other out.

Other Beermen to watch out for are Marcio Lassiter, who has averaged 17 points in the two quarterfinals games against Meralco, and former MVP Arwind Santos, who seems to have fully recovered from the right shoulder injury he suffered earlier in the tourney.

Even Ronald Tubid and Alex Cabagnot usually come in off the bench and provide quality minutes for Austria, helping the team recover from a 0-2 start and finish the eliminations ranked No. 2.

For its part, Rain or Shine wound up third after the 11-game eliminations largely due to the steady plays of Paul Lee (14.25 points, 4.58 rebounds and 3.42 assists per game) and the recent resuscitation of Jeff Chan’s game.

It is still Fajardo who should be the focus of attention.

The Philippine Cup Best Player of the Conference should have a lock on a second BPC award and thus a second straight MVP plum with averages of 17.15 points, 12.8 rebounds and 2.46 blocks per game.

How to push or draw Fajardo out of the shaded lanes would be Rain or Shine’s biggest problem, one Austria anticipates.

“I’m sure gagawa sila ng paraan para mawala sa comfort zone niya si June Mar, like pick-and-roll, and that they’ll try draw June Mar out kasi their bigs can hit it from deep,” offered Austria, adding Guiao can always go to the plays that have served his team in good stead.

“Kailangan i-match namin ang energy nila, kasi they always keep on running,” stated Austria. “I think they’re the No. 1 team in fastbreak points. Also, we have to stop their perimeter shooting.”

For sure, the E-Painters’ big men would be trying their darnedest best, according to Guiao. “Beau, JR and Raymond will have their hands full all series long,” he promised. (NC)