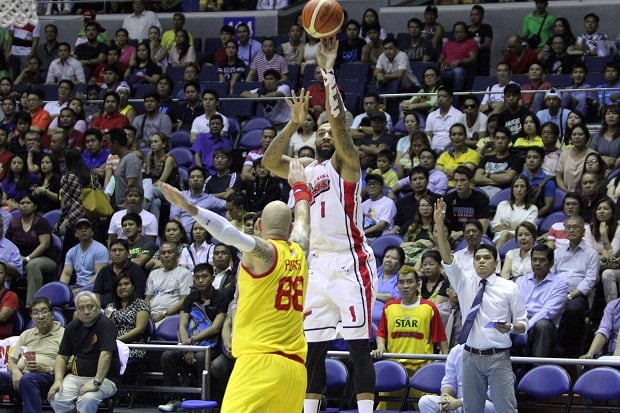 Coach Alex Compton just reminded his chargers at halftime the Star Hotshots are not their “big brothers,” and the Alaska Milk Aces came out smoking in the final half to salvage Game One of their PBA Governors Cup Final Four faceoff at the Smart Araneta Coliseum Wednesday night.

The Aces asserted themselves in their return from the halftime huddle and carved out a come-from-behind 97-91 win for the crucial head start in the best-of-five series.

“To be honest I was so upset in the first half. At halftime, I told the guys Purefoods (Star) is not our kuyas,” said Compton.

“We’re respecting them a lot. We’re a little scared of our kuyas,” Compton pointed out. “I told them we’ll lose some games and we’ll win some games but we have to play who we are.”

Play as the pressing, running and attacking Alaska team the Aces did in the second half, and in no time they made a decisive turnaround, erasing a 15-point deficit and seizing the lead at 68-67 with 21 seconds to go in the third quarter.

They took control, 77-70, on a seven-point binge by Chris Banchero and Dondon Hontiveros at the start of the final quarter, and Alaska hung onto the lead all the way to the finish.

In the end, the Aces just carved out another come-from-behind win as they’ve been used to doing very often nowadays.

“There’s a way to make it. The team has been great. It’s their heart and unity. That’s why I love coaching these guys,” said Compton.

Romeo Travis, Jvee Casio and Chris Banchero led the way as the Aces pulled a virtual repeat of their quarterfinals conquest of the Barangay Ginebra KingsFriday.

Travis came through with game highs of 28 points and 10 rebounds with Casio adding 18 markers and Banchero chipping in 10, five rebounds and three assists with the bulk of which came in the second half.

The entire Alaska team stepped up in the final half, pummeling the badly stunned Star side, 34-19, in the third period and, 27-21, in the payoff quarter.

Trailing by as many as 18 early on at 23-41, the Aces finally had their first taste of the lead at 68-67 on a three-point play by Vic Manuel off a foul by Joe Devance.

And it was all uphill ride for the Aces.

James Yap fired 10 points in the first half, including two treys in the second quarter, the first giving them the 18-point spread and a 51-34 margin shortly before the end of the opening half.

But Yap scored just a single field-goal basket the rest of the way.