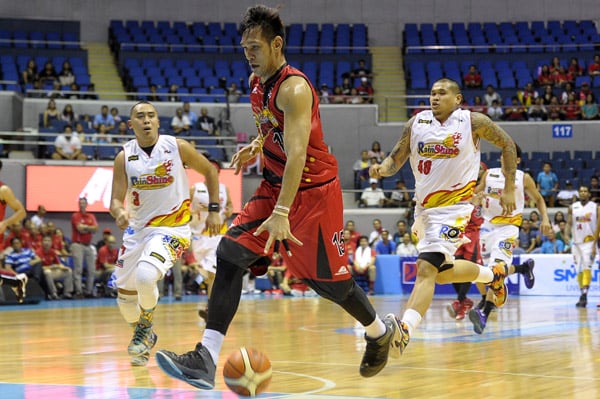 San Miguel Beer simply would not be denied.

With Arizona Reid showing the way and their other pillars taking the cue, the Beermen overcame another gutsy stand by Rain or Shine to fashion a 117-110 triumph Wednesday and advance to the PBA Governors Cup championship series at the Smart Araneta Coliseum.

Reid finished with a game-high 38 points on top of 11 rebounds, highlighting his sterling play with clutch points in the stretch that enabled SMB to keep Rain or Shine at bay after the latter waged a mighty fightback from 19 points down and came to within four points.

June Mar Fajardo did his part with 27 points and seven boards despite a scary moment while Arwind Santos came up with his finest all-around game yet with 15 points, 14 caroms and three steals, helping SMB wrap up the best-of-five duel in just four games.

In fact, all SMB starters finished in double figures with Marcio Lassiter chipping in 12 points and Alex Cabagnot 11 markers and seven assists.

“Credit to my players. The players don’t want to lose. They really want to be in the championship,” said SMB coach Leo Austria after steering the team to its record 35th finals appearance.

“We know this is going to be a physical game, but they maintained their composure. We don’t want this to get to a fifth game.”

There will be little time for celebration for the Beermen, however, as they start their race-to-four title duel with a well-rested Alaska crew right on Friday.

Austria expects that finals series to be at least as tough as the one they just went through.

“We’re relying on our scouting we only have one day to prepare and we still don’t know what to do against Alaska,” said Austria. “We have to watch the tape. Alaska keeps on running and my main concern is my team’s energy.”

The fire Rain or Shine provided should help toughen SMB up against the same Alaska team it beat for the season-opening Philippine Cup crown.

Wendell McKines, Gabe Norwood, Jeff Chan and Raymond Almazan heated up when the Elasto Painters needed it most, leading a sustained charge that pulled them within 104-108 with still 3:36 remaining.

But Santos drained the game’s biggest triple and although Chan converted on a reverse, Reid scored back-to-back baskets, the latter off a Santos offensive rebound, for a 115-106 cushion with only 67 seconds left to play.

McKines finished with 25 points and a game-high 17 rebounds while Chan added a personal conference-high 21 points.

Norwood notched 15 points, 11 in the fourth quarter that sparked and fueled Rain or Shine’s climb from the depths of a 74-93 deficit at the end of the third period.

“I told the players a big lead is not safe,” related Austria. “They know Rain or Shine is capable of coming back.”

There would be no epic comeback by Rain or Shine this time, however, unlike in Game 2 when it came charging back from 20 points down to steal it, 113-110.

In the end, the E-Painters wound up third in the conference, a notch lower than their finish in the Commissioner’s Cup.

Blame it on SMB’s unrelenting pressure from the opening quarter on, spiked by a 12-5 charge from an 81-69 count that gave the 20-time champion its 19-point bulge.

There were still some anxious moments for SMB, especially when Fajardo limped out after colliding knees with JR Quinahan with the Beermen ahead, 50-39, with still 3:57 left in the second period.

Rain or Shine readily pounced on the opportunity with Chan, McKines and Ryan Arana combining in a 9-3 spurt that moved them within 48-55.

The Beermen hung tough, however, with Lassiter capping a 9-2 counter with a buzzer-beating bomb from some 30 feet out to jack their lead back up to 64-50 at the turn.

Reid was already sitting on 18 points and five rebounds at the half with Lassiter toting 12 and Santos and Fajardo 10 apiece.

After missing his only field attempt and being limited to just one free throw in the first period, McKines started catching fire in the second quarter with 12 of his points while Chan also had 13 to match his Game 2 output right in the first 24 minutes of play.

Both teams started out hot with SMB making three of its first five triples tries and Rain or Shine four of six.

It is when SMB started making its 3s that mattered, however, as two came during a 13-0 tear that resulted in its first 11-point lead at 29-18, a difference that got stretched to 37-23 off Gabby Espinas’ elbow jumper.