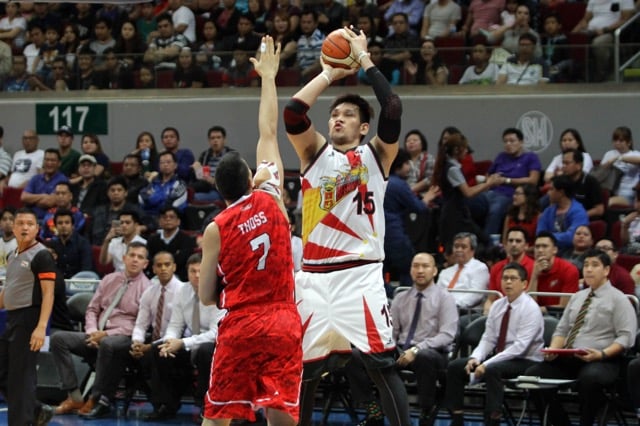 With hardly a breather from their tough semis grind, San Miguel coach Leo Austria was concerned with his team’s energy going into the finals.

But the Beermen were quick to assure they’re A-okay.

San Miguel’s core players played their usual minutes and delivered their usual numbers, leading the Beermen to a surprise 108-78 rout of a sluggish Alaska Milk side in Game One of their PBA Governors Cup title playoff Friday night at the MOA Arena in Pasay City.

Reid piled up 32 points, seven assists and six rebounds while Fajardo collected 18 points, 17 rebounds and three blocks, best typifying the energy and resolve the Beermen showed in the series opener.

Arwind Santos, Chris Lutz, Alex Cabagnot and Marcio Lassiter played their roles as San Miguel pounded the lackluster effort put up by the Aces from a four-day break.

“This is what I’m afraid of a long break. We lost our flow. The shots that we usually make, we missed it,” rued Compton.

“They really have a lot of threats and we’ve got to be better,” added Compton, insisting though that he is still positive of their chance to beat San Miguel.

“Their 30-point win tonight is not indicative of who they are and who we are,” he said.

Riding the momentum of their semis clincher only last Wednesday, the Beermen got off to a swashbuckling start and hardly wavered in a complete domination of the Aces.

The Beermen jumped the gun on the Aces, 31-12, and played a step ahead of their rivals all the way to the finish.

The Aces, the elimination round topnotchers who swept their quarterfinals and semifinals matches, came out flat and groped for form throughout.

From an early 19-point deficit, the Aces fought to within eight, 64-72, with a minute left in the third period, but the Beermen were quick to quash the threat.

The SMB gunners were on target right in the opening half, converting 7-of-17 three-pointers in another hot shooting that gave them a 54-41 lead at the turn.

Lutz, Cabagnot, Lassiter and Santos combined for a remarkable 5-of-6 treys to fuel a jackrabbit start that had the Beermen leading by 19 at 31-12.

It took the effort of the Alaska second group for the Aces to narrow the gap, 37-46, shortly before the end of the second quarter.

The Alaska reserves outscored their SMB counterparts, 26-5, in the first 24 minutes of play. But San Miguel starters outscored the entire Alaska team, 49-41.

Another key factor was San Miguel’s 12-0 advantage on points off turnovers in the first two quarters. (SB)