I got outcoached, says Compton after Aces’ 30-point loss 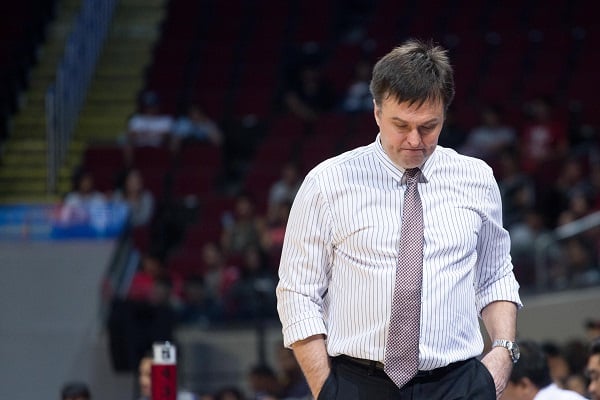 For coach Alex Compton, Game 1 of the 2015 PBA Governors’ Cup boils down to one reality.

“I got outcoached,” he said after Alaska’s 30-point defeat at the hands of San Miguel, 108-78. “Looking at the stat sheet, unfortunately, there’s no stat for being outcoached. That’s just what happened in that game. We got to be better.”

Compton rued the 55-44 rebounding discrepancy, a total opposite from what the Aces have been striving to achieve all conference-long which is to dominate the boards.

“They killed us on the glass. We’re usually great on the boards, but June Mar probably has a little to do with that. But really, their whole team rebounded the ball well,” he said.

The American coach also reiterated the thing he feared the most with Alaska’s long before before the finals action.

Dispatching Star on Sunday, the Aces had to wait for five long days just to get a crack at the hardwood once again, probably another factor for the team’s lackluster performance.

“This is what I was afraid of when we had a break,” he said. “I’ve seen it and heard it on the other teams, but I haven’t been on a team that had a long break going to a big series and I feel we lost our flow. I feel some of our shots we usually make, we missed. Credit San Miguel to that. They did a good job defensively. There’s not much story here but we got beat from start to finish.”

However, Compton is still optimistic with Alaska’s future in this best-of-seven series.

“I feel like the score is not indicative of who we are and who they are. They ran away with it, led by 12 points to start the fourth and the basket just became a garbage can,” he said.