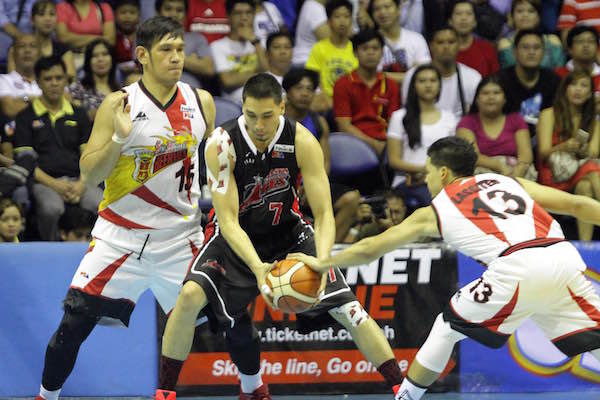 Only four ball clubs in the long history of the PBA have scored a 4-0 Finals sweep. San Miguel Beer has a shot at making the magnificent feat.

In the last 10 years, only two teams have bagged at least two crowns in a season. The Beermen are also in line to gaining this rare achievement

To many, it’s now more of a battle between the Beermen and themselves.

With San Miguel three-games-to-nothing up, it’s a question of when will the Beermen wrap it up.

San Miguel coach Leo Austria said, surely, they will do their best to win it as soon as they can.

The Beermen take their shot at the sweep at 7 p.m. after the 2015 PBA Leo Awards where San Miguel main main June Mar Fajardo is cinch to win a second straight MVP crown.

And it could well be a double celebration for Fajardo and a big party for the whole San Miguel team.

If ever, the Beermen will be fifth team to sweep their way to a Finals triumph in a best-of-seven series after Northern Cement versus Manila Beer in 1985, Swift Mighty Meaty against Seven-Up in 1992, Purefoods opposite Alaska in 2010 and Talk ‘N Text versus Rain or Shine in 2013.

Austria said they would stay focused by not thinking about the sweep but looking at Game 4 as a do-or-die game.

“We all know it takes four wins to win a best-of-seven series. The probability of Alaska grabbing it is so small. Nonetheless, we’ll not stop working until someone is declared champion,” said Austria, determined to give SMB a second crown in the season.

In the last 10 years, only Talk ‘N Text and the Star Hotshots have accomplished that feat.

Overall, the Beermen, the league’s winningest team, are in chase of a 21st crown.

Alaska coach Alex Compton tries to be defiant, saying there’s always a first in everything.

“There’s the first man who walked in the moon. There’s somebody that will be first in everything,” Compton said. “We’ll be there playing. If San Miguel is to win the series, they have to earn it.” (SB)