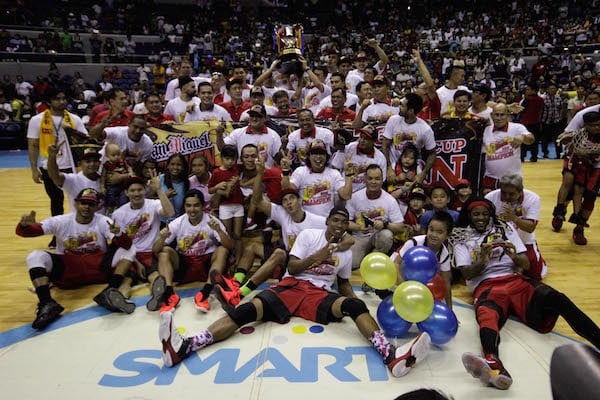 Arizona Reid outclassed Romeo Travis for one last time, June Mar Fajardo asserted his dominance yet again and San Miguel Beer completed a mighty four-game sweep of Alaska Milk to nail its 21st PBA championship before a crowd of over 12,000 at the Smart Araneta Coliseum Friday night.

Largely behind the sterling games of Reid and Fajardo, the Beermen walloped the Aces, 91-81, to capture the 2015 PBA Governors Cup title.

Reid sparkled with a game-high 33 points spiked by six three-pointers while Fajardo powered his way to 19 points and 21 rebounds as the Beermen smothered the Aces for a fourth straight game and romped off with their second crown of the season.

It was a historic moment marking the first time San Miguel Beer – for all its championships – scored a 4-0 sweep in the Finals. The Beermen became the fifth team to do the feat after Northern Cement, Swift Mighty Meaty, Purefoods and Talk ‘N Text.

And it’s a first double-championship in a season for the franchise since coach Jong Uichico steered the Beermen to the Commissioner’s Cup and Governors Cup title runs in 2000.

The championship came after Fajardo won four awards in the Leo Awards earlier.

With his regular double-double numbers, the Cebuano giant was also rewarded with the Holcim Cement-PBA Press Corps Finals MVP plum.

Twice Best Import awardee but never a champion in his four previous tours of duty in the local pro league, Reid accomplished his personal mission to finally win a PBA title.

“I’d been shooting for years. I finally got one,” said Reid.

Reid struck hard in the third period then Fajardo took over in the fourth as the Beermen overcame a 14-point first-half deficit, practically repeating their wins in Games 2 and 3.

Now a two-time PBA champion coach, Austria also gave credit to the Aces for the fight that they put up.

Alaska made a tough stand but San Miguel just proved to be the better team.

Romeo Travis and their second unit found a good rhythm in the second quarter, pounding the Beermen, 32-19, and enjoying the lead, 49-37, at the turn.

Reid fired away back-to-back treys in two separate occasions and totalled 16 points in a torrid third-quarter shooting that gave the Beermen a 70-65 advantage going into the final canto.

Then it was Fajardo’s time in the last 12 minutes – helping the Beermen pull away, 81-65, en route to a sweep.