Gilas goal in Jones Cup is to get better, says Baldwin 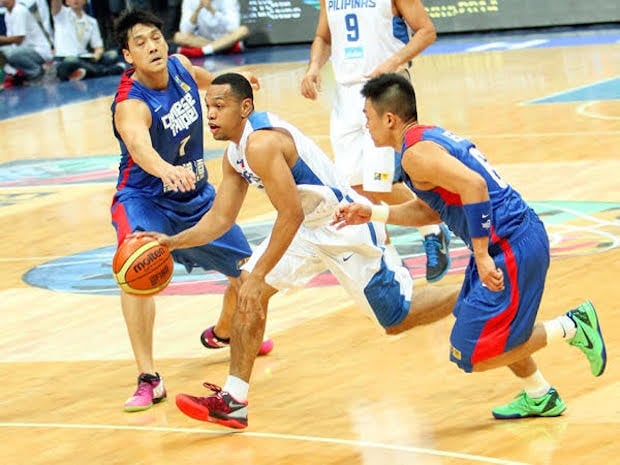 Philippines guard Jayson Castro dribbles past Chinese Taipei during the Fiba Asia Championship in Manila two years ago. Castro and the rest of Gilas will face Taipei in the Jones Cup which starts this weekend. INQUIRER FILE PHOTO

Less than four weeks before the start of the 2015 FIBA Asia Championship, Gilas Pilipinas scrambles to get into fight form, pressing its buildup in the 2015 Jones Cup Invitational Basketball Tournament in Taipei beginning Saturday.

Team PH, made up mostly of PBA stars, left via Eva Air flight to Taipei Friday, bringing along 17 players for their warm-up competition for the Asian meet that doubles as regional qualifier for the 2016 Olympics.

On Saturday, coach Tab Baldwin and his staff will finally enjoy the benefit of scouting Asian oppositions, surely putting special attention on the Iran-Korea tiff at 1 p.m. and on the Chinese Taipei-Japan tussle at 7 p.m.

Afterwards, the Nationals go on a grueling grind of playing eight straight games, a virtual simulation of what they will go through in the FIBA Asia Championship on Sept. 23-Oct. 3 in Changsha, China.

The Philippine team will be back in action in the Jones Cup after a two-year absence curiously after a title run in 2012 under coach Chot Reyes.

Baldwin said more than winning another Jones Cup crown, the goal is to get better and be ready for a crack at the FIBA Asia crown.

“Everything that leads up to (FIBA Asia) is about getting better, not about trying to win a game or get a medal. If it happens, and obviously we try to win every game we play, it’s a bonus for me,” said Baldwin.

“What we’ve got to do is become a team that can win FIBA Asia,” he added.

Filipino-American NBA rising star Jordan Clarkson will be at the sidelines, observing, in at least three games.

Baldwin is expected to trim his rotation towards the end of the invitationals that Team PH has won four times in the past.

For the record, the United States is the winningest team in the Jones Cup with 15 championships followed by the Philippines and Iran with four each.

The Philippines ruled the event in 1981 with the NCC team led by Ricky Brown, in 1985 with a group including Samboy Lim, Allan Caidic, Hector Calma, Franz Pumaren, Chip Engleland, Dennis Still and Jeff Moore, in 1998 with the Phl Centennial Team by coach Tim Cone then in 2012 with Gilas under coach Chot Reyes.(SB)