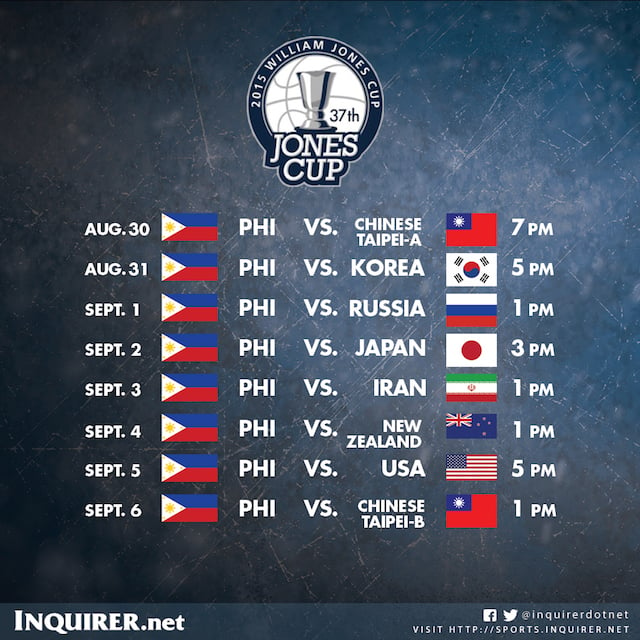 Gilas Pilipinas makes its return to the Jones Cup when it opens its campaign against bitter rival and host Chinese Taipei-A on Sunday night at Xinchuang Gymnasium in Taipei.

The Philippines drew a bye on Saturday in the opening day of the tournament but the game against Taiwanese squad set at 7 p.m. will be the team’s first of eight straight.

The Filipinos are making their first appearance in the Jones Cup since they won it all in 2012 where Barangay Ginebra point guard LA Tenorio was named MVP.

The last time Gilas and Taipei met was when the Nationals suffered one of their two losses in the 2013 Fiba Asia Championship in Manila despite holding a big lead.

Something that could serve as a motivation for Gilas heading into the game. The other is to win it for naturalized Filipino Andray Blatche, who had to fly back home to the US to attend the funeral of his uncle and look after his ailing mother.

Gilas faces Korea next on Monday, Russia on Tuesday then Japan before a showdown with defending Asian champion Iran on Sept. 3.

The Iranians made a quite a statement in its first game by ripping the Koreans, 77-46, despite their 7-foot-2 star center Hamed Hadadi seeing limited action.

The Philippines winds up its stint against New Zealand (Sept. 4), USA (Sept. 5) and Chinese Taipei-B (Sept. 6). The team with the best record wins the championship.

Jalen Green for Gilas? ‘It could be a possibility’