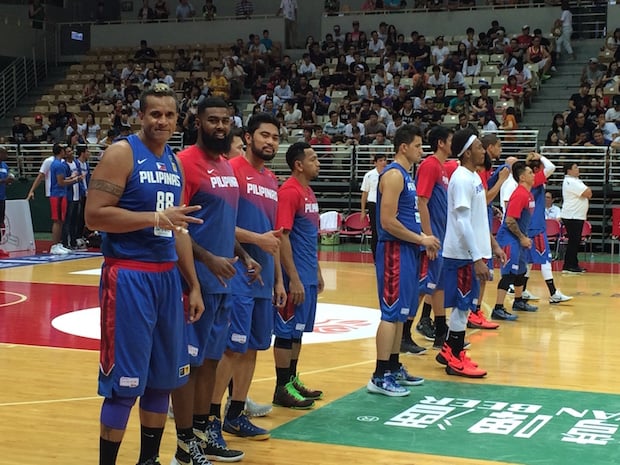 TAIPEI – Gilas Pilipinas, as expected, rampaged past Chinese Taipei B, 96-67, and secured first runner-up honors at the close of the 2015 Jones Cup invitational basketball tournament at the Xinchuang Gymnasium here Sunday.

The Nationals pulled away early and preserved a commanding lead to the finish to end up with a 6-2 win-loss record, a game behind Iran at 7-1.

Ahead of the Gilas-Taipei B tiff, Samahang Basketbol ng Pilipinas president Manny V. Pangilinan prodded the Nationals to finish strong, thanking them for the patriotism they stirred on their proud showing here.

“Best of luck Gilas on your last game. Team has generated a lot of goodwill here,” Pangilinan posted on his Twitter account @iamMVP.

“I’m surprised myself at the level of keen interest, and support, as well as a strong sense of patriotism you guys have stirred,” he also said. “Let’s finish strong today; make this country stand taller and prouder. Cheers. Puso!”

“With all the circumstances, I’m pleased with the second-place finish. It’s respectable,” said Baldwin. “It’s not really want you want, but we take the most of it. And there are many positives.”

“Like Iran, Japan and korea, we came here to get better for FIBA Asia. It’s a very difficult format playing eight games in eight days. I think there were positives out of that, but we suffered fatigue and injuries. Importantly, we’ll take the positives from our Jones Cup experience,” he added.

Without a doubt, the Nationals got improvements in so many aspects, putting some of these in display in their lopsided win over Taipei B.

Gary David took his turn to lead the way with a game-high 22 points spiked by two three-pointers while Jayson Castro, Ranidel de Ocampo and Moala Tautuaa contributed double-digit outputs as the Nationals rolled past the young Taiwanese squad for a fifth podium finish here in the last 11 years.

Tautuaa and Calvin Abueva delivered 12 and eight points, respectively, playing their eighth game in eight days here. The two were the only Gilas players who played here without a day’s rest.

Abueva finally got a rest after hurting his back on a bad fall six minutes and 17 seconds into the game.

Subbing for Abueva, Troy Rosario nailed the two gift shots as Gilas seized the lead at 22-21 before eventually pulling away en route to the win and the second-place finish coming after Gilas II’s title run here in 2012.

Iran recaptured the Jones Cup crown with a 7-1 record, its lone defeat coming at the hands of the Americans when the Iranians rested 7-foot-2 behemoth Hamed Haddadi.

Haddadi threw his weight against the Filipinos, but Baldwin can count on Andray Blatche to match up with the Iranian giant on their rematch in FIBA Asia.

The 6-foot-10 NBA veteran was to arrive here Sunday night and is to rejoin Gilas in practice in Manila starting Wednesday.

Blatche and the entire pool will have three practice days before plunging back into action in the MVP Cup on Friday to Sunday at the Smart Araneta Coliseum. (SB)

Read Next
Iran’s Kamrani could see action in PBA Season 41 as Asian import
EDITORS' PICK
SM continues to send relief assistance to remote towns in Batangas
PH preps for China virus: Question of when, not if
Museums ‘put to sleep,’ churches closed amid volcano’s unrest
Get exciting deals and discounts when you download the new McDonald’s App
Beyond water service: Maynilad builds massive infrastructure projects to clean up Metro Manila waterways
Seventh judge assigned to handle De Lima case
MOST READ
Taal Volcano flexes signs of restiveness anew
Part of Aurora Boulevard in Cubao closed from Jan. 25 – Feb. 1
Passengers from Wuhan, China to be flown out of Kalibo, Aklan – CAAP
Lacson on Duterte’s threat to end VFA over Bato’s canceled visa: Where is the connection?
Don't miss out on the latest news and information.