Cone takes blame for Ginebra loss: ‘I got totally outcoached’ 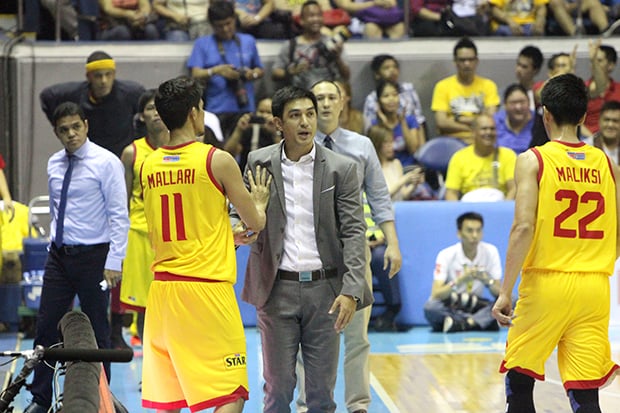 It’s not everyday you hear a coaching legend get outperformed by his protege.

But Tim Cone will be the first to admit that after his coaching debut with Barangay Ginebra was spoiled by Star and its rookie head coach Jason Webb, Cone’s former assistant, Sunday night.

“It was one of those games where I totally got outcoached,” admitted Cone, who has two Grand Slams under his belt, after the Kings’ 86-78 loss in a game where the final score won’t really tell just how much the Hotshots dominated the game.

In front of 16,576 fans inside the historic Araneta Coliseum, the much-awaited Manila Clasico turned to Manila Massacre as the Hotshots fired a searing run which left Ginebra in a daze.

The Kings fell behind by as much as 31 points before they managed to bring it down to a respectable margin.

Cone, though, knows that one game won’t define a season as he focuses on the bigger picture.

One thing that went well for the Kings is the showing of their big men Greg Slaughter and Japheth Aguilar, who combined for 54 points and 32 rebounds.

“It shows their capabilities. The offense is directed to them and they’re going to have opportunities to out up big numbers,” Cone said.

What Ginebra sorely missed, though, is contributions from its wing players and guards.

“It’s a 50-50 offense. I think our problem today is that we just didn’t get LA (Tenorio), Mark (Caguioa), Chris (Ellis), and Sol (Mercado), and even Joe (Devance) to a rhythm tonight. Those guys got to be able to contribute.”

Cone took responsibility for the loss.

“That’s my bad. We’re trying to focus on some things and we weren’t focused, we didn’t prepare for what Jason (Webb) is going to throw at us,” he said. “Jason came out and played zone, played all kinds of defenses and just didn’t allow our guys to execute. Our guys tried so hard to execute and they were really trying to please me.”

“That falls on me. I’ll take the hit today. I didn’t prepare them for what needed to be prepared for in this basketball game. We have other issues, other things we’re thinking about in terms of our execution on offense and defense. We’re not ready for complicated issues at this point. It happens, but it won’t happen again.”