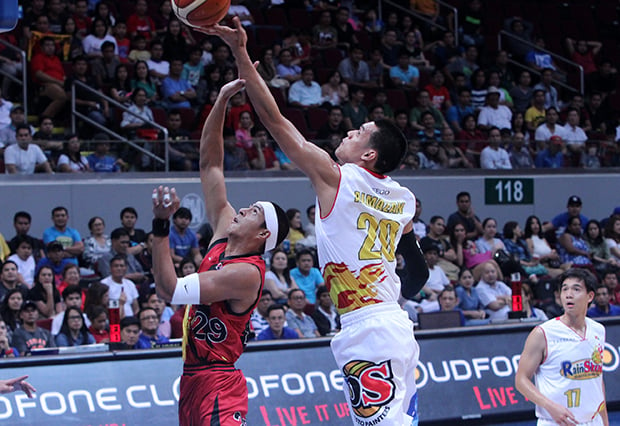 With a tremendous shooting coupled by a lockdown defense in the final half, Rain or Shine humbled reigning two-conference champion San Miguel Beer, 99-84, to gain solo lead in the 2015-16 Smart Bro-PBA Philippine Cup at Mall of Asia Arena in Pasay City Wednesday night.

Gunners Gabe Norwood, Jeff Chan, Chris Tiu, Beau Belga and Jericho Cruz all connected from beyond the arc, and the Elasto Painters helped one another to neutralize Junmar Fajardo in nailing a third win in as many games in the all-Filipino tourney.

“We just put up an effort to help each other out. No team can stop San Miguel defending Junmar (Fajardo) one on one,” said Rain or Shine coach Yeng Guiao.

“It’s one of those days where we’re able to disrupt the rhythm of San Miguel. It’s tough to stop them. I’m not sure if our effort is going to work the next time. But at least, we’ve got past them in the first round. Tignan natin kung swe-swertehin kami na makaharap namin sila in future rounds,” Guiao also said.

Playing catch-up basketball nearly the entire first half, the Elasto Painters made a big turnaround in the third quarter, pummeling the Beermen, 30-14, largely behind a torrid 6-of-9 three-point shooting by Tiu, Chan, Belga and Cruz.

The E-Painters surged ahead, 71-58, at the end of the third and roared on in the final canto, leading by as many as 17, 97-80, before eventually handing the defending champs a first loss in three games.

“We just found a way to play good defense tonight. Before this game, we couldn’t decide whether we’ll try to stop Fajardo inside the lane, or extend to their guards who can shoot the trey,” said Guiao.

The E-Painters did well on both, holding Fajardo down to 13 points and 10 rebounds while at the same time limiting the SMB shooters to seven three-pointers.

In their first two games, Fajardo averaged 17 points and 14.5 rebounds.

Back-to-back three-pointers by Tiu ignited a whirlwind pushing Rain or Shine upfront at 69-53.

And there was no stopping the E-Painters from there on.

“Our bigs alternated all game long on Junmar. Meanwhile, our guards were active. The energy was there. We ran our breaks and we’re able to adjust when they zoned us. Things fell into place,” said Guiao.

Maverick Ahanmisi finished couples of their transition plays and rookie guard wound up with 14 points, five rebounds, four assists and one steal against two turnovers.

“A lot of people were doubting Ahanmisi. He showed today he can play in this league,” said Guiao.