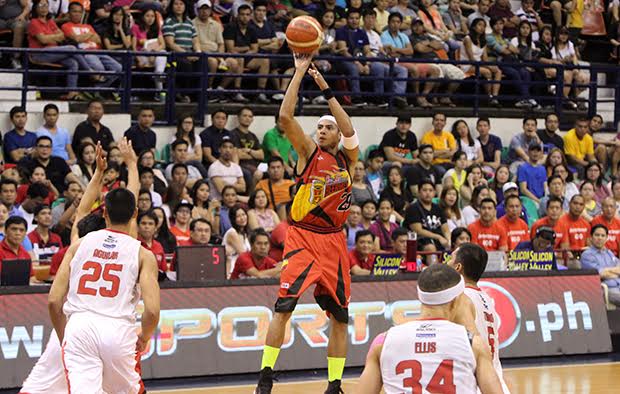 June Mar Fajardo bested Greg Slaughter in a clash between two of most dominant centers in the PBA today and San Miguel Beer overwhelmed Barangay Ginebra in the second half en route to a 100-82 blowout win in the 2016 Smart Bro PBA Philippine Cup Sunday night at Philsports Arena in Pasig.

Fajardo, the reigning two-time MVP, posted a double-double with 22 points and 12 rebounds on 52% shooting while also getting help from several of his teammates.

Arwind Santos scored 20 of his game-high 24 points in the first half, Ronald Tubid drilled in four 3-pointers for a 15-point night, Marcio Lassiter added 13 points while Chris Ross had 10 points, four rebounds, eight assists and two steals for the Beermen, who climbed to 4-1.

“I didn’t expect that this will happen and we’ll be able to win this big because I know Ginebra would really prepare hard against us,” said SMB head coach Leo Austria in Filipino.

“But the players, especially June Mar who had his best game this conference, they know who our priority was and they really followed our game plan,” Austria added.

Slaughter also recorded a double-double with 21 points and 11 rebounds while Japeth Aguilar had 21 points and nine boards for the Kings, who fell to 1-3.

The Beermen hit 14 3-pointers while the Kings missed all of their 12 attempts from long range.