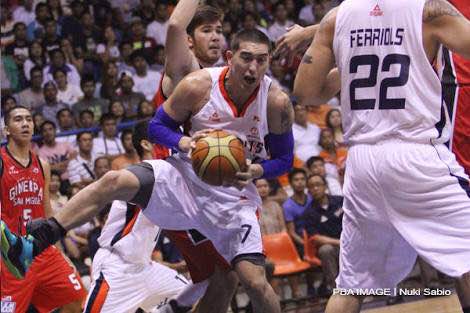 They have to start winning games.

For Barangay Ginebra and Meralco, that’s the bottom line as they clash in a rare Tuesday bill in the Smart Bro PBA Philippine Cup at the Alonte Sports Center in Binan, Laguna.

Game time is at 7 p.m. with both the Gin Kings and the Bolts out to avoid plunging deeper down the bottom of the team standings.

For all their stars and champion coach, the Gin Kings are mired down the pits with a 1-3 win-loss slate.

With their retooled lineup and own grand slam-winning bench chieftain, the Bolts, meanwhile, have yet to win in four starts in the all-Filipino tourney.

They are likely to come out with a sense of urgency as they face off in Laguna 48 hours after their numbing defeats at Philsports Arena Sunday.

The Bolts, meanwhile, put to naught Gary David’s 40-point explosion in a 106-108 defeat at the hands of the Barako Bull Energy.

It’s yet another wasted effort for the whole Meralco team which has just couldn’t find a way to close out a game.

The Bolts also had tough stands that they failed to turn to “W’s” versus the Beermen, the Blackwater Elite and the Talk n Text Tropang Texters.

The Gin Kings have simply been very inconsistent. They were blown out by the Star Hotshots, 78-86; started strong but fared miserably at the finish in a 79-82 loss to the Energy then finally nailed down one, 93-92, versus the Alaska Milk Aces in Dubai.

The Gin Kings blew a bid for a second straight win as they were mangled in the second half by the Beermen.

“We’re not at their level. It was very obvious. It was disappointing,” said Cone.

“We have a history and a legend that we have to live up to and that’s the never say die attitude. We just didn’t have that, and that’s something we’ve got to try to build and believe in and get the fans to believe that we believe it too,” Cone also said.

Children and loss: How Kidlat de Guia’s family is coping