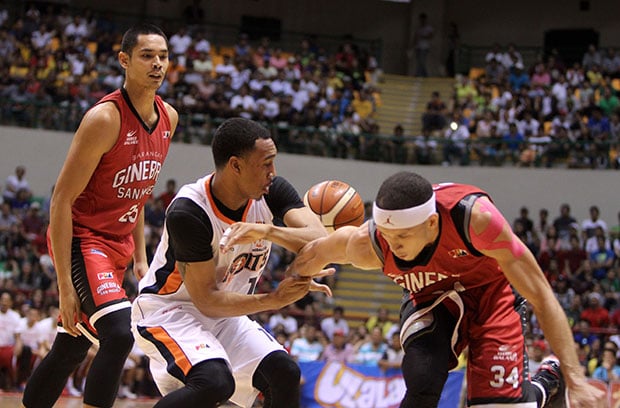 Barangay Ginebra underscored that size matters while ranged against the badly undersized Meralco side.

The Gin Kings put up their worthiest showing under coach Tim Cone, making good use of all their advantages to fashion out an 89-64 rout of the Bolts in the Smart Bro PBA Philippine Cup at the Alonte Sports Center in Binan, Laguna Tuesday night.

Ginebra made a big turnaround from its 18-point blowout by San Miguel Beer, completely dominating Meralco to close in on the tournament leaders with a 2-3 win-loss card.

Greg Slaughter again put in double-double numbers and finally got the help he’s longing for from teammates as Ginebra nailed a second win in its last three games while keeping Meralco winless in five starts.

With Japeth Aguilar also doing damage at the paint and the Ginebra gunners hitting their targets, the Gin Kings pushed the Bolts to the brink of elimination this early.

Tournament format calls for the 12 teams to play one round robin in the elimination phase with only the Top Eight advancing to the playoffs.

In all three conferences last season, five wins proved to be the magic number in making it to the post-elims play.

Slaughter and Aguilar topscored with 18 points each with the former also making 14 rebounds, three assists, one steal and one block in 32:39 minutes of action.

In their first four games, the 7-foot-1 averaged 25.7 points and 18.0 rebounds but lacked support from his teammates.

The Gin Kings showed some balance in this game, with reserve wingman Nico Salva hitting two triples for a total of 11 markers.

Gary David fired three treys and a total of 18 points as he once again led his team in a losing cause.