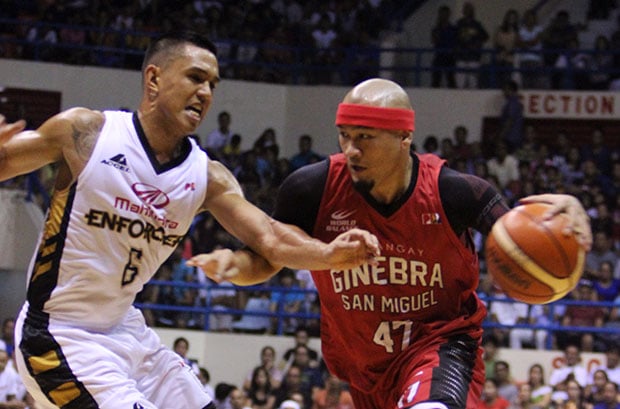 ANTIPOLO — Struggling Barangay Ginebra hit the .500 mark at the halfway point of the 2016 Smart Bro PBA Philippine Cup elimination round.

With crucial help from new recruits Joe Devance, Jervy Cruz and Scottie Thompson in the crunch, the Gin Kings got past the Mahindra Enforcers, 80-76, to tie the Barako Bull Energy at seventh place at 3-3 in the all-Filipino tourney.

Before a sellout crowd at the Ynares Sports Center here, Devance, Cruz and Thompson provided grit and spunk carrying Ginebra to a second straight win following an 89-64 victory over the Meralco BoltsTuesday.

“We got a big lift from Joe, Jervy and Scottie. You don’t win all the time with your star players. We got good smarts from the bench and it really helped,” said Ginebra coach Tim Cone.

Ginebra came from behind to disappoint Mahindra with Mark Caguioa and Japeth Aguilar rooting on the bench.

Greg Slaughter was also out most of the fourth quarter but came in towards the end, draining a jumper and two charities to help ice the win.

Needless to say, Ginebra continued to struggle, barely beating out Mahindra in a battle and thus handing the Enforcers a fifth loss against a lone win.

“It’s good to get a second win in a row. It’s not pretty, but we’re not to earn pogi points right now. We just want to grind out and win as much as we can. That’s where we are right now,” said Cone.

“We beat a Meralco team at 0-4 then Mahindra at 1-4. These are teams you have to beat, get them under your belt and hopefully that put you in the proper position playoff wise. That’s our philosophy right now,” Cone also said.

Devance fired eight of his 14 points in the fourth quarter, Cruz added two clutch baskets while Thompson ran their plays as Ginebra beat out Mahindra in the end.

A fresh trade recruit from Barako BUll, Cruz tallied 10 points, six rebounds and one assist in 23:46minutes of action.

Mahindra took the half at 42-38 and stayed in the lead until Devance carried Ginebra ahead, 61-60, three minutes into the fourth.

Slaughter was held to 16 points and eight rebounds – both way off his norms.