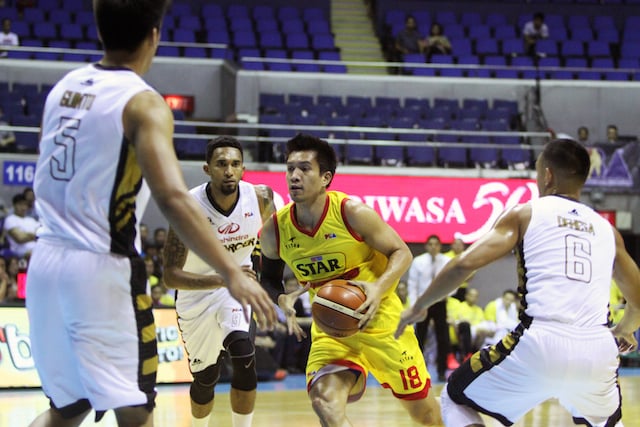 The expected reawakening for Star finally came Sunday and the Hotshots could only thank their defense for it.

Mark Barroca not only scored 26 points but also led a balanced effort on both ends of the court in the endgame as Star downed Mahindra 104-96 in the 2016 Smart Bro PBA Philippine Cup at Smart Araneta Coliseum.

Jake Pascual and Barroca each also pulled off a crucial steal in the endgame, typifying the Hotshots’ resolve to pull off the much-needed victory against the tenacious Enforcers’ crew.

As a result, the Hotshots snapped out of a four-game slide and improved to a 3-6 record overall that fanned their hopes of making it through to the quarterfinals.

Star’s win also pushed Barako Bull, NLEX and TNT to the quarterfinals since each already has four wins.

The Hotshots have to do their own part by taking at least a win in their remaining games against Barako and Blackwater.

“I really felt a couple of games in that four-game losing streak could have gone our way. But the competitive balance of this league is such that even if you give your best it would not be enough,” said Webb.

It was the second straight loss and seventh in nine games for Mahindra, which must prevail over GlobalPort and Blackwater and hope those wins would be enough to push it through to the next round.

The Enforcers, led by the new career-highs of Aldrech Ramos (26 points) and Karl Dehesa (24 points), sure did put up one whale of a fight engaging the Hotshots through six deadlocks and as many lead changes.

Dehesa’s back-to-back triples even put Mahindra on top 94-91, before Star buckled down to real serious work.

After Barroca’s charity split Pascual tapped the ball from Dehesa, leading to a fastbreak basket and-one from Alex Mallari that pushed Star ahead 95-94.

In the ensuing inbound, Barroca stripped the ball from Paolo Hubalde and fed Mallari for another basket that made it a 97-94 game, just under two minutes left.

That was when Mahindra’s relative inexperience surfaced as Dehesa missed back-to-back three-point tries while James Yap scored on a drive and Barroca also laid up following a Pascual offensive rebound.

Dehesa’s drive broke Mahindra’s silence, but that proved too little too late as Yap even drained a triple at the buzzer for the final count.

“That was what I’ve been saying all along,” noted Webb. “We were down three and in just a matter of seconds we went up by five. We’ve got to learn that making stops is more important.”