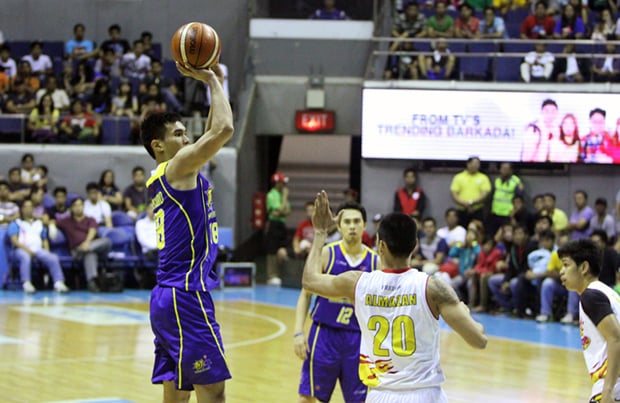 Rain or Shine returned cold and rusty from a weeklong rest, and the TNT Tropang Texters made the most out of it to boost their Top Two aspiration in the 2016 Smart Bro PBA Philippine Cup eliminations.

The Texters blasted the Elasto Painters right in the opening minutes and roared all the way to an emphatic 95-85 victory before a good weekend crowd at Smart Araneta Coliseum.

“Nung umpisa di natin alam na ganon ang mangyayari. Unintended but we made our shots and they missed theirs,” said coach Jong Uichico after the win that carried TNT a notch up to joint fourth place with Globalport at 5-3.

Rain or Shine hardly got into the game as it went scoreless in the first six minutes of the game and struggled with a woeful 37-percent shooting.

The E-Painters missed all their first 21 three-point attempts, an added woe to their 21 turnovers that sent them to a first loss in their last five games.

“I’m giving credit to our guys. We came out playing hard defense, unlike in our other games. Yung depensa namin at the start helped set the tempo of the game,” said Uichico.

A disappointment to Uichico was their huge 25-point lead whittled down to 10 in the end.

“We played only three quarters and a half. We didn’t show killer’s instinct,” rued Uichico, hoping his team to get going in their last three games in the elims.

Before this game, Rain or Shine led the league with an average of 103 points on 46.1 percent shooting.

In this game, the E-Painters barely went above 80 in piling up garbage points in the closing minutes of the game.

Rain or Shine outscored TNT, 31-25, in the payoff quarter with a closing binge marked by four three-pointers by Jericho Cruz, Don Trollano and Jeff Chan in the last four minutes.

The team bled for 4-of-26 three-pointers in this contest.

Early on, the E-Painters were missing even layups and uncontested short jumpers.

Top rookies Moala Tautuaa and Troy Rosario fired 27 points and 19 points, respectively, to lead the Texters in their ghastly rout of the E-Painters.