Ginebra’s never-say-die attitude is drawn from the fans, says Cone 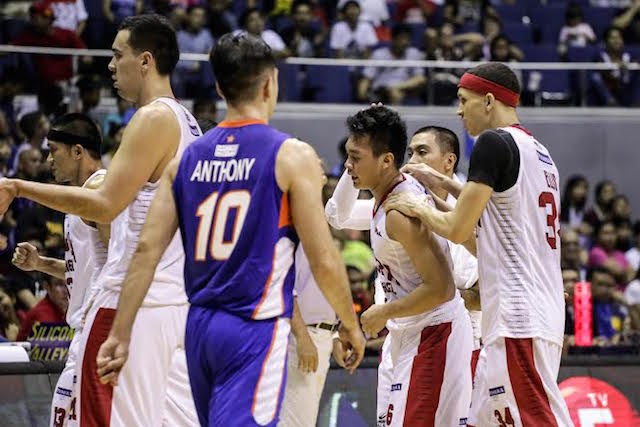 For the first time in his nearly three decades of coaching, Tim Cone found himself on the winning side of Ginebra’s never-say-die mantra.

Buoyed by a raucous crowd at Araneta Coliseum, Ginebra rose from 22 points down to stun NLEX on Sunday night for the biggest comeback this season.

Cone is all too familiar with Ginebra’s tradition of overhauling seemingly insurmountable deficits throughout the years having coached against the crowd-favorites in his first 25 years of coaching.

But it was only on Sunday that the winningest coach in PBA history had fully understood where that mantra is coming from.

And no, it’s not originating from the players or coaches.

Cone acknowledged having a lot of heroes with the likes of rookie Scottie Thompson, who scored 14 points in the final 18 minutes and Greg Slaughter, whose two blocks in the last two minutes were as crucial as his 18 points and 15 rebounds.

“We just had a lot of heroes out there tonight and you have to have that to comeback and win a game like that,” Cone said of his players. “I’m just proud of them.”

But for Cone, the ones who really led the rally didn’t even tally a single point, rebound or a block. They didn’t even come off the bench.

The crowd was getting restless and more anxious after each NLEX basket in the third quarter. Then it turned silent when the Road Warriors’ lead had swollen to 22, 75-53.

Ginebra’s loyal legion of fans, though. never doubted and their faith was rewarded with the Kings pulling off one of the most thrilling wins this season.

“You can’t help but get so pumped up when those fans get so crazy like that and you’re on the run and it’s the first time I’ve been on this side of it,” Cone said. “We gotta give all our credit to the fans and take great pride in helping us get back into that game.

“Truly, it’s the first time that I’ve been on this side of it. And I always thought, well, maybe it’s the coaches and the players but no, it’s really the fans and they did the work for us.”