Ginebra holds off TNT, sets up quarterfinals clash with Star 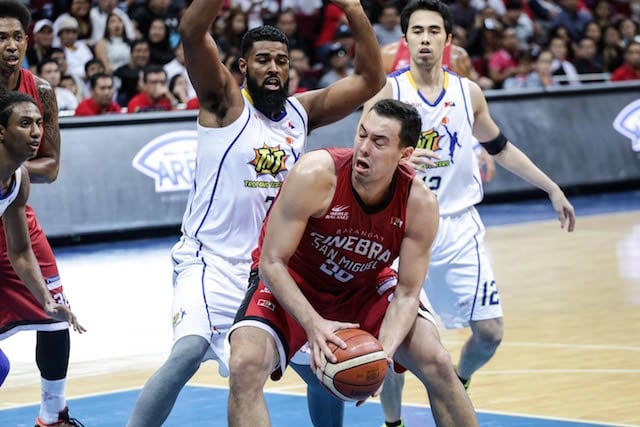 Barangay Ginebra stretched its run to three games and gained fourth seeding in the 2016 Smart Bro PBA Philippine Cup playoff play following a 91-84 drubbing of TNT at the close of the elimination round Sunday night at the Mall of Asia Arena in Pasay City.

Riding the momentum of crucial triumphs over Blackwater and NLEX, the Gin Kings rolled past the Tropang Texters to set up an elite matchup with the Star Hotshots in the first stage of the quarterfinals.

As the higher seed, Ginebra will enjoy a twice-to-beat advantage versus Star, taking its first crack at the second stage of the quarters on Christmas Day also at the MOA Arena.

With the loss, TNT settled for sixth spot, ranged against No. 7 NLEX in the next round.

The other pairings pit No. 3 Rain or Shine against Blackwater and No. 5 Globalport opposite Barako Bull.

“At one point in the tourney, we’re at 1-3, and we finished all the way to fourth place. I have to applaud our guys for that,” said Ginebra coach Tim Cone.

“The reward is playing an elite team in the Star Hotshots. Hopefully, we are better and we understand what we want to do,” Cone added.

Greg Slaughter literally and figuratively played big to lead the Gin Kings past the Tropang Texters.

The 7-foot behemoth came up with 27 points and 14 rebounds, the bulk of which he made in their key assaults in the second half.

From a slim 45-40 halftime lead, the Kings pulled away at 76-58 and hung tough in the face of the fierce TNT rally in the end.

Troy Rosario, Jason Castro and Larry Fonacier led the fightback that saw the Texters threaten at 81-85 with 2:55left to play.

The Ginebra dry spell ended as Sol Mercado set up Slaughter for a short stab making it 87-81 with only 50.5 ticks to go.

The Kings carried a five-point lead into the third quarter after a tight first half that saw no team lead by more than six.

Towards the end of the second quarter, Japeth Aguilar nailed a twinner and a triple that made it 45-40 in favor of Ginebra at the turn.

Then Slaughter took over, piling up 14 points and seven rebounds as the Kings stretched their lead to 70-56 through the third period.

Ginebra made it 72-56 later on a 13-to-nothing roll in a span bridging the last two quarters.