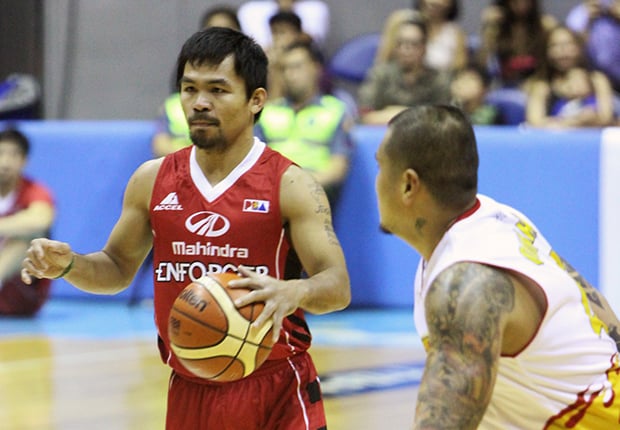 Manny Pacquiao may not be present at Mahindra’s sidelines for the most part this conference, but it doesn’t mean that the playing-coach isn’t keeping tabs on the Enforcers’ campaign in the 2016 Philippine Cup.

Assistant coach Chito Victolero explained that though, the eight-division boxing champion hasn’t been around due to other commitments, Pacquiao makes sure he’s updated with his team’s progress.

“He’s working on the elections and he has a fight by April yata, so right now hindi ko pa alam yung plano ni coach Manny. Tingnan natin by next conference,” he said.

Pacquiao is gunning for a Senate seat in the coming elections in May next year.

He has only appeared twice this conference, nailing his first field goal against Rain or Shine in Mahindra’s season-opener before playing in Dubai against Alaska.

Pacquiao wasn’t with his team when it lost to Blackwater, 108-99, in what turned out to be Mahindra’s final game of the conference, but he may have been already informed that the Enforcers failed to make the quarterfinals as they bowed out with a 2-9 card.