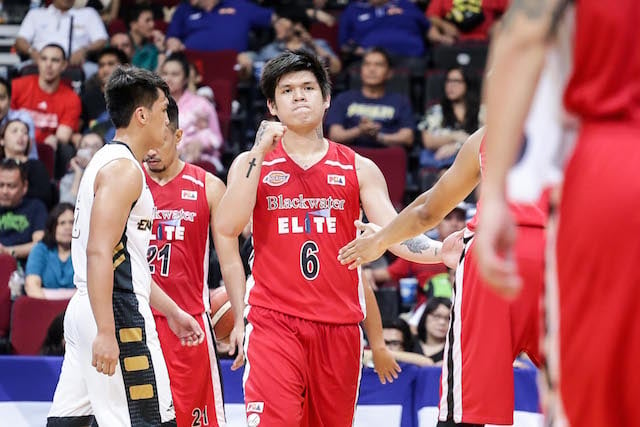 Blackwater guard Carlo Lastimosa pumps his fist during the Elite’s win over the Mahindra Enforcers Sunday at Mall of Asia Arena. Tristan Tamayo/INQUIRER.net

Blackwater head coach Leo Isaac believes his team is heading the right direction in terms of progress, but fears the Elite may not be tough enough to handle the pressure of playoffs.

The second-year Elite are making their first playoff appearance after a forgettable maiden season by knocking out the Mahindra Enforcers at the close of the Smart Bro PBA Philippine Cup elimination round last Sunday.

“It’s step in the right direction. A couple trade and acquisitions have made us a better team, but we’re still a work in progress, although I can see encouraging signs. The team is showing some maturity and the young players – Carlo Lastimosa and Art dela Cruz – are blending well with our veterans,” Isaac observed.

Their quarterfinal stint may well be a milestone of sorts for the young franchise. But Isaac, who had been through many playoffs with Barangay Ginebra during his prime, isn’t too excited about their prospect in the next round.

Rain or Shine stands in the way of the Elite in the quarterfinals and he knows that getting past the Elasto Painters is a daunting task not to mention they have to win two in row against the No.3 seed.

Blackwater tries to fight for another day against Rain or Shine on Saturday, 3:00 p.m., at Mall of Asia Arena.

“They’re a tough match up. They are big, they are smart and they have good chemistry. Frankly, I don’t know if we could keep up with them. They’ve been through many playoff battles so they certainly know how to handle the pressure,” said Isaac.

But make no mistake, Isaac isn’t throwing in the towel.

Isaac said their knockout victory against Mahindra is a good confidence boost and hopes his chargers would build on it. (Dave Coros)