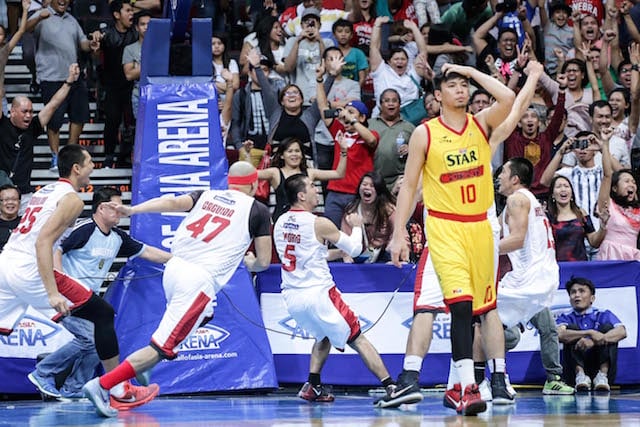 Barangay Ginebra beat out Star, 92-89, in a Christmas Day overtime battle to remember to advance to the knockout stage of the Smart Bro PBA Philippine Cup quarterfinals before a crowd of nearly 22,000 at Mall of Asia Arena in Pasay City.

When a lot had given up on them, leaving the venue with over four minutes to play, the Gin Kings pulled off a great trick, fighting back from 18 points down then outlasting the Hotshots in a shootout in overtime.

At the buzzer, the crowd left at MOA whooped it up with the Kings, celebrating what would go down as among the most epic Ginebra triumphs in league history.

“I had mixed emotions. I feel bad for (Star coach) Jason (Webb). I don’t want to beat Star like this. But I’m happy for the fans,” Cone also said.

The Kings rose from deathbed and delivered the knockout blow on the Hotshots in OT to set up a do-or-die duel with the Globalport Batang Pier for a seat in the Final Four.

Earlier in the day, the Batang Pier eased out the Barako Bull Energy, 94-85.

In overtime, Ginebra bested Star in an eyeball-to-eyeball confrontation, winning the match on a buzzer-beating trey by LA Tenorio.

The two teams engaged in a classic shooting contest from afar in extension play with Tenorio and Sol Mercado firing away two each for Ginebra as against the three of Mark Barroca and Alex Mallari.

Curiously, there’s no basket made from the stripe and from the two-point area in OT.

“We struggled with our shooting. Then all of a sudden, in the last three minutes, we’re making our shots from everywhere,” said Cone.

“Jason had us off-balanced all game long. He knows us. Jason and Johnny (Abarrientos) know the nuances of our game. It’s a struggle to play them,” Cone also said.

But that’s until Tenorio and Mercado got going at endgame, enabling Ginebra to overcome an 18-point deficit in the last six minutes and eight in the final minute.

The Kings even had a chance to win it in regulations but Mercado muffed a breakaway layup at the buzzer.

Ginebra was 3-of-22 from beyond the arc in the first 45 minutes of the game.