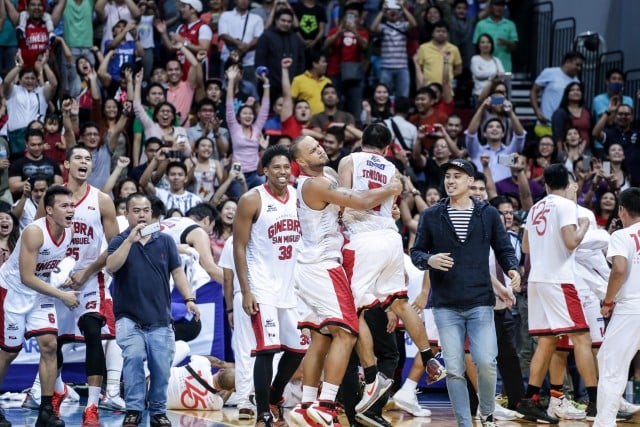 A good number of the record crowd in attendance at Mall of Asia Arena on Christmas Day had already fled for the exits at the 4:01 mark of the fourth quarter.

The fans had every reason to leave at that point with their team Barangay Ginebra down by 15, 76-51, after James Yap’s step back jumper as his defender Chris Ellis stumbled.

Those who stayed and chose to remain in their seats, though, knew better that somehow, someway, the Kings will come back even if the players themselves had already thought about waving the white flag.

“Some of the fans had already left and went home. And even us, the players felt it was over and coach Tim (Cone) also sat down [on the bench],” admitted LA Tenorio, whose buzzer-beating 3-pointer in overtime capped Ginebra’s comeback from 18 points down to shock Star.

“But some of the guys stepped up and some of the players just didn’t want to give up and that’s what’s good about our team when we’re helping one another,” Tenorio said. “That’s what we’ve been looking for a long time. Our chemistry, that’s what brings out the never-say-die spirit.”

For so long, Ginebra hasn’t been the same team its fans had come to love over the years. But this season, in just its first conference under the league’s winningest coach in Tim Cone, the team has been able to bring back its identity.

Two weeks ago, Ginebra also rallied to beat NLEX as it climbed back from a 20-point hole and after Friday night’s comeback of the ages to eliminate Star, the Kings’ never-say-die spirit is definitely in full effect.

Tenorio, however, hopes the Kings won’t have to always rely on their resilience to win games in comeback fashion.

“First, I’m hoping that we don’t have to be trailing down the stretch and win that way, but this just goes to show that some of the players just don’t want to give up.”