Blackwater not backing down without a fight vs Rain or Shine 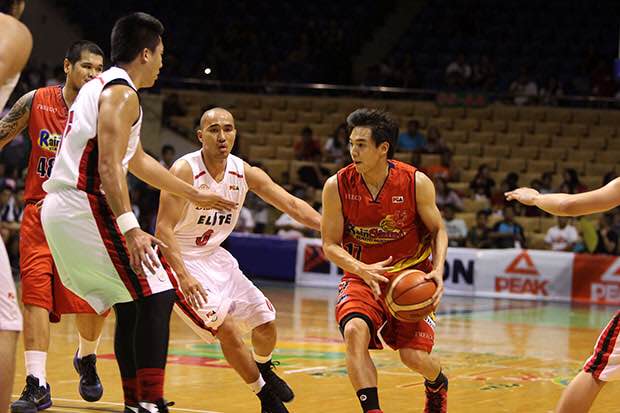 Blackwater may be a huge underdog against Rain or Shine in the franchise’s first playoff game on Saturday.

But hope is still not lost on the Elite, more so for head coach Leo Isaac.

“We’ll do our very best,” he said. “Considering what happened to them, we know (Rain or Shine) is going to vent its frustration on us.”

And the Elasto Painters have all the reasons in the world to do just that, squandering a chance to advance outright to the semifinals after their 111-106 defeat to NLEX last Saturday and relegated to the number 3-spot.

Coach Yeng Guiao, however, would rather look at their situation with a positive outlook.

“It’s a big disappointment but we just have to accept it and move forward.

“We made some mistakes, we paid for our mistakes and overall, if you look at the positive side, we’re still number three and we have a twice-to-beat advantage.”

It’s a tough pill to swallow, but the feisty mentor acknowledges the price the Elasto Painters have to pay and sees the longer route as an opportunity for his team to sharpen their saw.

“This is the consequence of losing: You go the hard way. But at the same time it’s going to sharpen you up, it’s going to get you ready for the bigger games,” said Guiao.

Isaac, meanwhile, is wishing that would not be the case and is eyeing to stun Rain or Shine this time out.

“Hopefully, we can compete with them and see a winning line coming to the final minutes of that game,” he said. “Maybe, baka maka-isa kami against Rain or Shine.”

That was almost the case when the two first met back in Nov. 21. The Elite were able to stay in the game early on before the Elasto Painters found their bearings and walloped Blackwater, 103-81.

Isaac wants to keep the game competitive up until the endgame. Tip off is at 3 p.m. at Mall of Asia Arena.