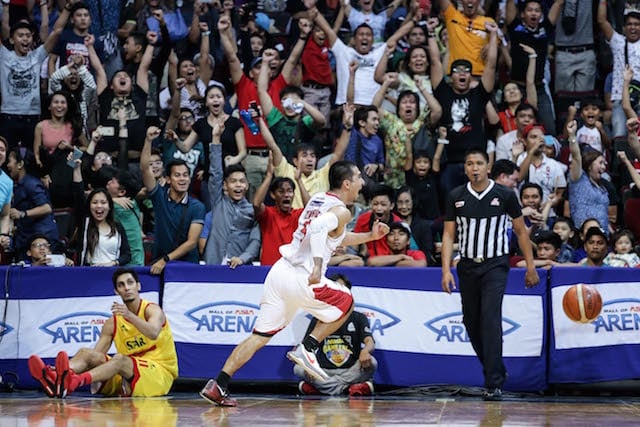 There wasn’t a better gift for Barangay Ginebra hopefuls than a win for their favorite team on Christmas day.

And there couldn’t have been a better ending for Ginebra fans than Friday night’s thrilling finish with LA Tenorio coming up with the buzzer-beating triple in overtime.

Of the seven 3-pointers scored in the overtime period, two belonged to Tenorio and his final one sent the Kings to the next round and their fans to a Christmas bliss.

Tenorio, who shot 3-of-10 from deep, said he did not think too much of the shot and just took it as the waning seconds ticked away.

“I never thought of the shot. No one else in our team wanted to shoot anyway and coach Tim [Cone] didn’t put anyone else into the game,” Tenorio said. “There were others who were shooting, but we all struggled from the field.”

Numbers do backup Tenorio’s claims as Ginebra only shot 34 percent from the field and only 28 percent from deep.

“I was at the bench and I just observed we really are cold.”

And the shot that ended the second Clasico of the 2016 Philippine Cup wasn’t originally intended for Tenorio, instead it was for Mark Caguioa.

“The play was for Mark but someone gambled on the inbounds play and my defender helped, Sol [Mercado] made an extra pass,” Tenorio said. “Good thing I made it.”