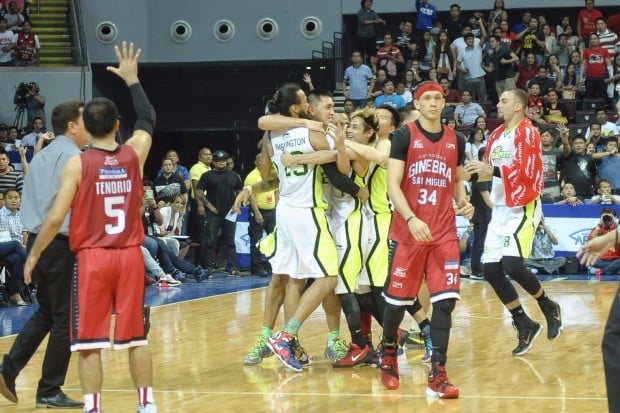 GlobalPort nabbed the one of the two remaining semifinals spots after ousting Ginebra, 84-83, in overtime Sunday in the 2015-2016 PBA Philippine Cup at Mall of Asia Arena.

With the Batang Pier holding to a slim 84-83 lead in the final 8.0 seconds of overtime, Stanley Pringle received an inbounds pass, evaded any foul from the hounding defense of Sol Mercado and Greg Slaughter and milked the clock en route to the historic first franchise appearance in the semifinals.

“We all know Ginebra is a tough team and coach Tim (Cone) is a good coach, pero breaks of the game yun eh,” said coach Pido Jarencio. “Credit to the boys. They deserve na makapasok ng semis.”

GlobalPort’s semis feat, its first since joining the league in 2012, sent it to a best-of-7 series against Alaska, set to start on January 4.

The lethal duo of the Batang Pier led the charge as Stanley Pringle finished with 25 points on a 10-of-18 shooting from the field and eight rebounds while Terrence Romeo had 23 points, five boards, and five assists.

Amid the spotlight on GlobalPort’s two-guard combo, Billy Mamaril was the unsung hero at the end of regulation, knotting the score at 74 with 4.1 seconds to go off of a Pringle assist, and blocking Tenorio’s potential game-clinching shot from behind at the buzzer.

Greg Slaughter’s 25 points and 18 rebounds went down the drain as Ginebra failed to replicate its 92-89 overtime win against the Hotshots on Friday.

Tenorio also sustained his shooting stroke fresh from his game-winner against Star, finishing with 18 markers, nine boards, and five assists, but that proved to be moot as Cone failed to make it to the Final Four in his first conference for Ginebra.