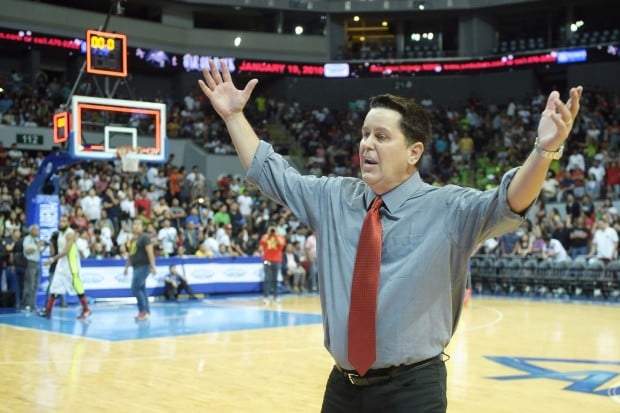 Ginebra coach Tim Cone after the Kings’ loss to GlobalPort in the knockout PBA quarterfinals game. Photo by Tristan Tamayo/INQUIRER.net

Ginebra has until 12 noon on Monday to file a protest after its 84-83 knockout loss to GlobalPort Sunday night in the 2015 PBA Philippine Cup quarterfinals at Mall of Asia Arena.

An official protest before the PBA Commissioner’s Office requires a minimum bond of P20,000.

Kings’ coach Tim Cone signed the official scoresheet following the setback but stayed mum after coming out of the dugout on whether they would file an actual complaint.

Cone and the Kings were contesting a supposed non-call, a five-second ball-hogging violation against Stanley Pringle, in winding seconds in overtime.

After receiving the inbound pass, Pringle milked the clocked and evaded fouls from the trap of LA Tenorio and Greg Slaughter to seal the victory which sent them to the semifinals against Alaska starting January 4.

It was a historic win for the Batang Pier as it is their first semifinals appearance since joining the PBA in 2012.