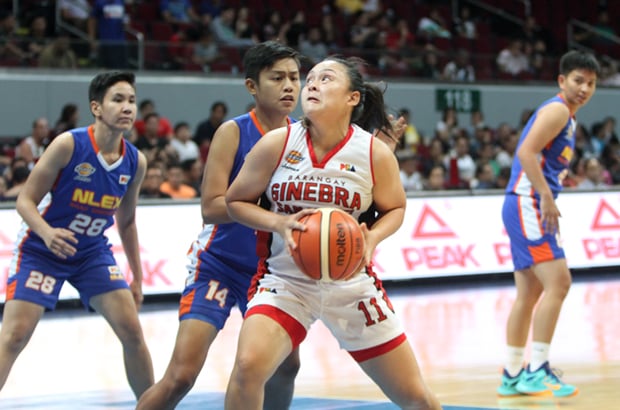 Barangay Ginebra vs NLEX in PBA Women’s 3-on-3. PBA IMAGES

Before the men take center stage, the women will plunge into action first as the PBA Dickies Women’s 3-on-3 semifinals tip off on Monday at Mall of Asia Arena.

Group A top seed Blackwater clashes with NLEX at 5:30 p.m., before Ginebra, the surprise Group B leader, goes up against Alaska at 5:50 p.m.

For the Road Warriors squad, they acknowledge the seemingly daunting task at hand in toppling the Elite, who, like the Kings, are 5-0 in the elimination round.

“We train everyday and we review our own plays, as well as Blackwater’s,” said NLEX’s Katherine Sandel.

Together with Fria Bernardo, Angelica Ortega, and Anna Regina Buendia, Sandel knows the challenge posed by Blackwater in the crossover semifinals, but acknowledges that the knockout format presents NLEX a huge chance to score an upset.

But luck should be a valuable tool, too, for the Road Warriors as the Blackwater team of Camille Sambile, Allana Lim, Camilla Denise Escoto, and France Mae Cabinbin has been blowing out their opposition.

In the other bracket, it will be Alaska shooting for a shocker against a focused Ginebra team for the right to advance to the best-of-three Finals.
Rica Francisco admitted that it was still quite a surprise for the Aces to finish at 4-1 and make it to the Final Four.

Making it to this stage, Francisco and teammates April Siat, Vangie Soriano, and Denise Patricia Tiu want to make the most of the opportunity and not just be satisfied with just a semis stint.

“For the semifinals game, we just practiced before and after the holidays,” she said.

However, an equally motivated Ginebra team stands in their way, and Angeli Gloriani said that the Gin Queens, who will also lean on Bernadine Rose Yamamoto, Maria Micaela Bautista, and Mary Joy Galicia, are aiming to extend their unbeaten run to the finals.

“It’s nothing out of the ordinary. We practice our offensive motions repeatedly so come game time, it’s more like a natural thing for us,” she said.