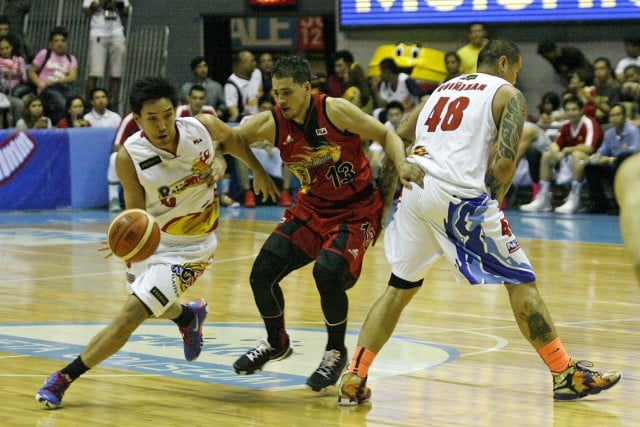 Leo Austria had seen it coming.

Austria, the San Miguel Beer head coach, knew the Beermen and Rain or Shine Elasto Painters would meet again in the semifinals.

“With all due respect to the other teams, we really prepared for Rain or Shine,” he said. “Since the start of the quarterfinals, pakiramdam na namin sila ang makakatapat namin.”

The Beermen, who will be the fresher team after a securing an automatic semis berth, only lost twice in the eliminations with one of their losses dealt by the Painters in a 99-84 blowout two months ago.

Their best-of-seven duel starts on Tuesday night with the Beermen looking for redemption against the third-seeded Painters.

“We have to get back at them,” said Austria.

But he was quick to add that his players can’t afford to focus too much on what happened the first time they faced Rain or Shine.

“What happened in the eliminations is already a thing of the past. This is playoff time so it will depend on your preparation and concentration regarding this game,” he said.

“For me, Rain or Shine is a tough team to beat. Since the start of the season, alam ko na contender sila,” said Austria.

The Painters made many changes in the offseason, including a deal that sent its former guard Ryan Araña to the Beermen to make way for a more youthful team led by sophomore daredevil Jericho Cruz and a slew of undaunted rookies in Maverick Ahanmisi, Don Trollano and Josan Nimes. They also added another big more than willing to do the dirty work in Jewel Ponferrada.

“The changes could’ve helped them, and knowing Rain or Shine, they might be thinking this is their time and they’ll be going all-out,” Austria said.

And now, it’s up to the Beermen to deny the Painters, whose star guard Paul Lee is expected to make his debut this season after recovering from an ACL injury, of that chance.

“We always have the advantage with June Mar (Fajardo) when it’s single coverage. But I’m sure na they will always help,” he said. “We’re anticipating those, but we told the boys that we’re here not just because of June Mar, but because everyone’s contributing and willing to help him.”